The courage of Sara Wookey 4

The subject is the so-called performance art featuring nude dancers on display as dinner-party decorations at the Museum of Contemporary Art’s fundraising gala in mid-November. Some poked heads thru tables as patrons dined; others lay inert with skeletons draped on their bodies. All women decorating tabletops, mind you. No men. 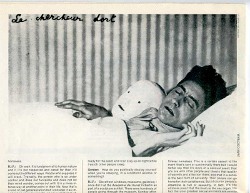 It’s a tired idea that the likes of Jean Cocteau or other surrealists probably thought of and discarded circa 1931. In fact, based on photos at right and below, the artist behind the spectacle, Marina Abramovic, seems to have more than a passing familiarity with Cocteau’s work.

I support the dancer/choreographer Sara Wookey in her call for professional wages for dancers. I reprint her essay below in hopes that it will further an important conversation. 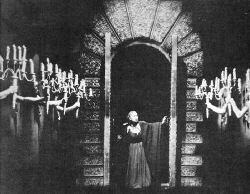 I decry the exploitation of artists anywhere, but it holds particular repugnance when it takes place at an art museum. I like that Ms. Wookey has “outed” the issue. Believe me there is desperation and exploitation going on with arts writers too. I support fair pay for artists, and that includes arts writers.

MOCA needs to address its responsibility in the controversy in a more thoughtful manner than, “For me this is the way the art world works, it’s all about dialogue,” which were the inadequate, self justifying words that MOCA Director, Jeffrey Deitch, tossed off a few weeks ago. As our society lurches sideways if not backward on so many fronts, it’s disturbing to see the lack of moral leadership from a vanguard institution like MOCA.

The bottom line seems to be, does MOCA respect and support the professionalism of artists, or does it exploit them as objects? You cannot have it both ways.

Writes Ms. Wookey on the gig she turned down:

I was expected to lie naked and speechless on a slowly rotating table, starting from before guests arrived and lasting until after they left (a total of nearly four hours). I was expected to ignore (by staying in what Abramovic refers to as “performance mode”) any potential physical or verbal harassment while performing. I was expected to commit to fifteen hours of rehearsal time, and sign a Non-Disclosure Agreement stating that if I spoke to anyone about what happened in the audition I was liable for being sued by Bounce Events, Marketing, Inc., the event’s producer, for a sum of $1 million dollars plus attorney fees.

4 thoughts on “The courage of Sara Wookey”