A potpourri of PST 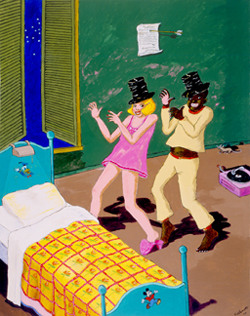 Under the Big Black Sun: California Art 1974-1981 at MOCA‘s Geffen Contemporary, Little Tokyo, features works that are dark in theme and execution with a strong undercurrent of self-absorption. Underneath this veneer, the show’s honesty, integrity and depth of subject matter compel the viewer to spend time with each work, to watch the videos and read the narratives. The reward is greater understanding of this important eight-year period of California art that profoundly affected art of the region, the nation and the world. These contemporary works address themes of the cold war, feminism, gay issues, insanity, homelessness, a return to the earth (among many others) and include: a video of the MGM lion, growling endlessly.

Andy Wing at the Art Resource Group, Newport Beach, features the work of the artist who lived in Laguna Beach, 1957-2004, until his death. He dedicated his central aesthetic purpose to immersing his most personal self in the 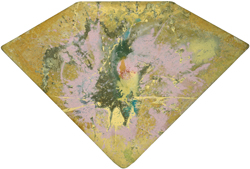 creative process and merging both with nature. Working outdoors, Wing often incorporated the leaves, dirt and branches that fell onto the canvasses – “gifts” from his Henri Rousseau-style garden, fertilized with organic compost.

In “Environmental Paintings and Murals” (1959-1986), working without brushes, Wing threw paint and sometimes his body onto canvasses he had hung from Eucalyptus trees. To these, he added plaster for depth and shape, fiberglass dust, tiles, marbles, dice, bits of mirrors, pottery shards, woods chips and more. 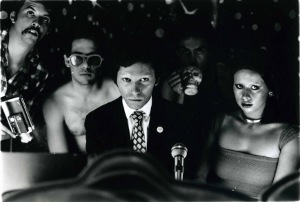 Asco, the Spanish word for nausea, is the name of a performance/ conceptual art group, whose members lived and performed in East Los Angeles, 1972 to 1987. “Asco” also connotes revulsion by its four principals, Gronk, Willie F. Herron III, Harry Gambo, Jr. and Patssi Valdez (the only woman) for the condition of the Mexican American community and for political events, including the Vietnam War and its disproportionate number of Mexican Americans participating. They expressed their art in still photography, video, painting, sculpture and numerous street performances, many with elaborate plans and costumes. This show is at LACMA.

George Herms’ “Chaos’ Job: Restrain Order” at Grand Central Art Center, Santa Ana, is composed of a potpourri of: an ancient, rusted ironing board, wheel barrow, lawn mower, muffin tin, fan, early cell phone, broken mirrors, torn crumpled posters, a collection of miniature cars, lamp bases, an old pink tea kettle, several broken plastic bowls filled with endless piles of rusted tools, as well as numerous other detritus. The artist attaches, arranges and piles up these bits of trash into harmonious assemblage artworks. He takes this 100-year-old technique to its ultimate, enigmatic stage, creating harmonious, nostalgic pieces and installations that bear the simplicity of haiku poetry. When asked if he builds these pieces with intention or randomly, he responds, “The inanimate objects tell me what to do.”

Liz Goldner is an arts writer blogging at contemporary-art-dialogue.