The latest from Leo the Lion

I very much enjoyed seeing Jack Goldstein’s art film, “Metro-Goldwyn-Mayer” (1975) screened by LA Filmforum as part of  “Industry Town: The Avant-Garde and Hollywood,” one of Pacific Standard Time’s offerings around L.A. This journey through eight short experimental films amply showed the shadow side of filmmaking in Los Angeles. Directors as disparate as Kenneth Anger, John Baldassari, and Peter Mays weighed in with disaffected views of life in the industry town. 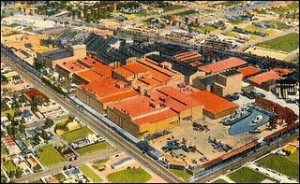 Apropos, earlier in the week, at Hollywood Heritage’s “Evening at the Barn” series,  I enjoyed a great slide show/lecture in support of the new book, “MGM: Hollywood’s Back Lot” presented by the three co-authors, Steve Bingen, Stephen X. Sylvester, and Michael Troyan. Not a typical celebrity-driven presentation, but a real bricks-and-mortar tour that mourned the loss of six back lots of MGM Studios. The sprawling system once filled 185 acres of Culver City. This swathe of Los Angeles MGM head honcho Louis B. Mayer (who stabled his horses there when not running them at Santa Anita racetrack) proudly called a “city within a city.”

The authors put it all into context: “MGM was like General Motors. It was the top dog. If you worked there, you were a little above somebody from another studio.”

You can go to town on the book’s website here. Lotta photos and information.

At the end of the evening, during the Q&A, Robert Dix, the surviving son of the great RKO actor from the silent era, Richard Dix, and himself a character actor of some esteem,  shared a special MGM memory. Dix Junior was at MGM on contract from 1954-56.

“I was just getting my training. In those days, they had programs where you could learn the craft.

“Everyone was [abuzz] that they were getting an unknown to play Ben Hur. One of my classmates said, hey Bob, you have a chance.

“Soon after that, I get a message that Dore Schary wanted to see me. I went into the executive offices, through all the secretaries and thick carpets.

“Schary said, ‘Your contract’s coming up. We want to renew you. On one condition — you get that car off of our lot.’ “

Laughing at the memory, Dix said, “Yes, it was a dream factory and it was a lot of fun.”