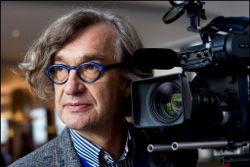 Director Wim Wenders began his career as a member of the new German cinema movement of the 1970s; along with Rainer Werner Fassbinder and Werner Herzog, he brought German culture and film to an international audience. Throughout his career, Wenders has been interested in identity and landscape, coupled with a deep sense of observation and search for truth in the world surrounding us. The road movie, from KINGS OF THE ROAD and ALICE IN THE CITIES to PARIS, TEXAS and UNTIL THE END OF THE WORLD, has been one of his favored modes of expression. A director of deeply romantic fantasies such as the acclaimed WINGS OF DESIRE, Wenders also is a meticulous chronicler of 20th (and now 21st) century culture and politics. In addition to his fiction works, Wenders is known as a top-notch documentarian across a wide range of genres: his BUENA VISTA SOCIAL CLUB remains one of the most beloved of all music documentaries.

Screening at the Cinematheque a selection of Wim Wenders’ finest films, including FARAWAY SO CLOSE!, THE AMERICAN FRIEND and PALERMO SHOOTING.