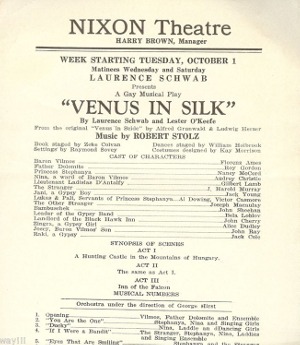 Rummaging around the Internet, I found this priceless image of a program dating from the Nixon Theatre in my home town of Pittsburgh.

The Nixon Theatre was the top game in town — the place where circa 1971 I saw naked hippies writhe on stage in “Hair.” Not surprisingly, the hard-working Jack Cole once pounded the Nixon floorboards, playing a Hungarian gypsy in “Venus in Silk” in 1935.

I’m guessing that this operetta, a format that was a precursor to American musical theater, was a schmaltzy remnant of the Austro-Hungarian empire.

There’s Jack, as Raki the gypsy, listed at the bottom of the roster. Well cast. To put it mildly, Cole, who picked up the habit from his Denishawn days, was an early dance “internationalist.” 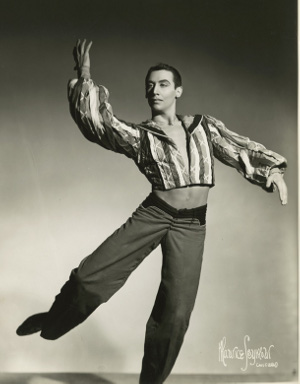 The name of Cole’s nightclub partner, Alice Dudley, whom he first met dancing for Ted Shawn and then in the Humphrey-Weidman troupe, appears right above his. That means that Jack Cole and Alice Dudley danced in i) modern dance, ii) night club and on iii) Broadway stage. There were no categories… they did it all!

The Internet auctioneer refers to “Venus” as a “rare flop” reflecting that the show opened in Pittsburgh on  October 1, 1935 as an out-of-town tryout and closed the following week in Washington, D.C., failing to arrive on Broadway.

The operetta had only had its debut in Zurich in 1932 — tough times in Europe for its Jewish composer Robert Stoltz. A timeline of Stoltz’s amazing career here. I do love how “Venus in Silk” is called, on the program, a “gay musical.” I bet it was.