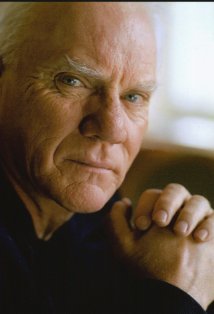 Charming the knickers off his audience by telling witty tales of Stanley Kubrick and Lindsay Anderson, actor Malcolm McDowell earned extra points by showing respect to the great James Cagney. The occasion was the 40th anniversary screening, at the Academy of Motion Picture of Arts & Sciences in Beverly Hills, of Kubrick’s exuberant, brilliant, thought-provoking and just fabulous “A Clockwork Orange” (1971).

McDowell said,” I loved him [Cagney]. I loved the way he moved, the way he gave those lines, there’s no bullshit.”

Indicating the speed and rat-a-tat rhythm of Cagney’s line delivery, McDowell noted, by comparison, “I come from the theater world, with those menacing [Harold] Pinter pauses.” 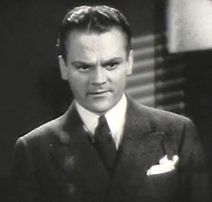 “You can’t watch anyone else when Cagney is on the screen …  the energy.”

This kind of fits considering the interesting cinema bond between the two actors. In his day, Cagney played the terrifying psycho-killer, Cody Jarrett, in “White Heat“; and in our era, McDowell stunned the world with his portrayal of Alex, a young hoodlum-practitioner of ultra-violence. Both characters, memorable cinema anti-heros.

In his youth a fetching presence with light brown locks and a lithe figure, McDowell is now one of the coolest looking white-haired guys since Kris Kringle. Oddly, he somewhat resembles the way Cagney looked in his elder years.

“I saw [Finney], as a young man. in Saturday Night and Sunday Morning. I sat in [a cinema] in Liverpool and watched him. I thought, ‘God, I could do that. I’m gonna try!’

“Just as Gary Oldman says he saw me and [drew inspiration] from me.”