On Lindsay Anderson, with whom he worked on “If” & “O Lucky Man”

He was a great man. He was a genius. And I say that even though today you’re 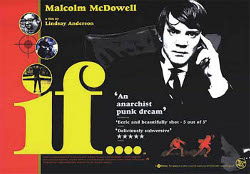 a genius if you can do a crossword puzzle.

He was a real curmudgeon; for a young actor, to put in so much time, he was like an Oxford don. He took me to the National Film Theatre to see Kurosawa’s work. He even once introduced me to Kurosawa  — when he came to London.

Lindsay was very taken with Hollywood. “O Lucky Man” was a real homage to Preston Sturges’s “Sullivan’s Travels,” which is a masterpiece. 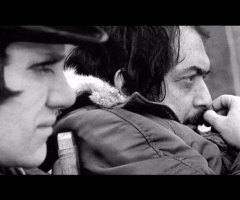 Everyone was scared of him. He had done Paths of Glory, Strangelove, Lolita. In my total ignorance, when I went to meet him, I thought I was going to see Stanley Kramer. Thank god that wasn’t so.

I was very close with Lindsey Anderson. I expected the same with Stanley. You give everything on a movie. You go to hell and back. It was a year of my life. I loved him dearly. You couldn’t do what I did, give everything, unless you love the person. He never called me back. It hurt me.

The meaning of the opening shot of “A Clockwork Orange”

Stanley operated [the camera], a zoom lens on a track, which started on my face and pulled back so you could see the whole Korova Milk Bar.

[After the shot], he said, “I noticed that you lifted the milk glass up and kind of gave a little something to the camera. Why did you do that?”

I wanted to tell the audience, “You are coming on a hell of a long ride with me.”

thank you tom sutpen for the mm-sk portrait