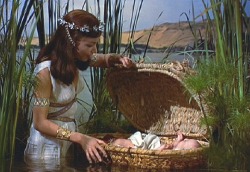 Foraging around the internet for information on Cecil B. DeMille’s great one, I was delighted to learn about Fraser Heston.

A guy of my generation, Fraser, at the tender age of three months, made his film debut playing Baby Moses in “The Ten Commandments.”

Now, Fraser mostly had to float around the bullrushes waiting for Nina Foch to retrieve him from slavery. Meanwhile, his real-life dad, Charlton, was shvitz’ing on top of Mount Sinai under the weight of the two mighty slabs. 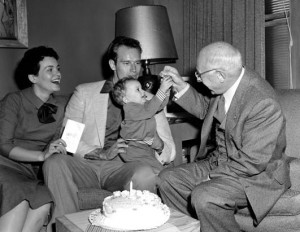 In the photo at right, Charlton and Lydia Heston and director Cecil B. DeMille, celebrate Fraser’s first birthday, February 13, 1956, in Los Angeles.