It was one of those heaven-sent Sunday afternoons in Los Angeles — the ambient temperature so idyllic that you floated freely without a modicum of pushback from Mother Nature. And in this effortless environment, we very much enjoyed an afternoon of plein air classical music, courtesy of Jacaranda, Music at the Edge.

In a garden party announcing the new season and fostering live-music delirium, Jacaranda co-founder and artistic director, Patrick Scott, programmed an afternoon of piano solos and duets so sensuous and alive that the excellent luncheon, served mid-way with wine, was a delicious distraction. 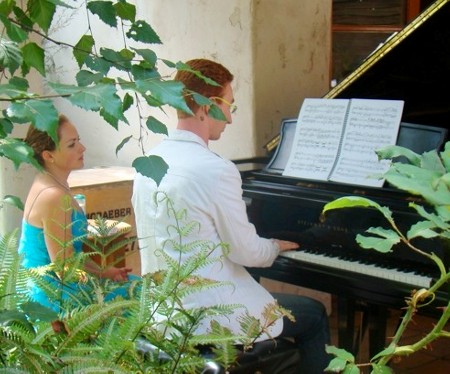 Hosting in one of L.A.’s startling backyards that never gives a hint from the street, piano guy David Andersen and the sculptress Tanya Ragir, aided by patron Robert Goldschein, set up dueling pianos beneath the balcony of their charming guest house. You spent half the concert fighting the fantasy of showing up the next day with a suitcase and moving in.

The program sprawled along the massive talents of a roster of young pianists. The Russian-trained Yana Reznik, after grappling with Granados (Enrique), was precise and marvelous in Prokofiev’s fast-flying “Toccata.” This manic piece of music from 1912 wound up and down like a clock. Danny Holt, red-headed but cool tempered, carefully unpeeled David Lang’s muted “Memory Pieces,” a minimalist work from 1997. Belgian-born Steven Vanhauwaert spieled Rachmaninoff, then Holt sat across from him on the second keyboard; the two held a piano dialogue speaking the language of Franz Liszt.

Aron Kallay contributed composer Nico Muhly’s “Preludes”; the 30-year-old Muhly’s “Clear Music” is slated for Jacaranda’s first concert of the season. Topping the afternoon, husband-and-wife team, Gavin and Joanne Pearce Martin, delivered a Mozart piano sonata for four hands with such celestial harmony it made you believe in marriage, I mean, Mozart.

All was right with the world. Even the pernicious debt ceiling gave way to art.

Jacaranda targets works that are undiscovered and under-appreciated from any period, but has a predilection for the contemporary and challenging. Programs are rigorous and educational. To join this passionate group of friendly people with distinctive taste in music and wine, subscriptions (well priced and there are discounts) may be the way to go. It’s a fine way to meet people in our socially challenging town.