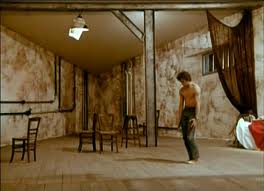 Choreographer Roland Petit, a giant of contemporary ballet — he more or less pioneered the genre — died this weekend.

Petit created “Jeune Homme” on Jean Babilée in 1946, but it’s strongly identified with Rudolf Nureyev, who was outstanding in the filmed version from 1966.

I was touched this morning, hearing of the Frenchman”s passing at 87, by this video of Petit coaching Agnès Letestu.

Even if you cannot understand Petit’s (crystal-clear) French, I hope you get something from watching this.

Petit instructs Letestu on how to stretch her leg: “You must do it with great concentration, with great intention and force, with authority, strength and projection. You must touch the audience, those in the last row, far away [indicates the balcony.].

The calm rationality of French pedagogy, seen in this video, has resulted in the Paris Opera Ballet’s supreme status today.

This methodology is also addressed in Fabrice Herrault’s wonderful new documentary, “Lignes d’une vie,” which concerns the extraordinary Claude Bessy. An amazing blonde bombshell of a ballerina in the ’50s and ’60s, Bessy made a further remarkable contribution by teaching and coaching the next generation of Paris Opera Ballet étoiles.