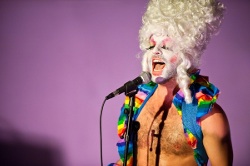 Informed that his upcoming performances at Los Angeles’s Alexandria Hotel will go toe to toe (he, barefoot, they, in pointe shoes) with American Ballet Theatre’s “The Bright Stream” at the Dorothy Chandler Pavilion, Guggenheim fellow Miguel Gutierrez said: “Shit! It’s always between me and those fuckers!”

So, who are you for, Miguel or ABT?

Dancer/choreographer Miguel Gutierrez creates solo and group works with dancers, music, and visual artists under the moniker Miguel Gutierrez and the Powerful People.  Gutierrez has received three New York Dance and Performance “Bessie” Awards, is a 2010 Fellow in Choreography from the Guggenheim Foundation and a recipient of a 2010 Foundation for Contemporary Arts grant for Artists;  he has also received support from the National Endowment for the Arts, Creative Capital, the Jerome Foundation, the Rockefeller MAP Fund, the National Performance Network Creative Commissioning Fund and New York Foundation for the Arts’ Fellowship and BUILD programs. He has worked with Joe Goode, John Jasperse, Juliette Mapp, Sarah Michelson, Jennifer Lacey, Deborah Hay, and Alain Buffard.

One comment on “Miguel Gutierrez vs. American Ballet Theatre”