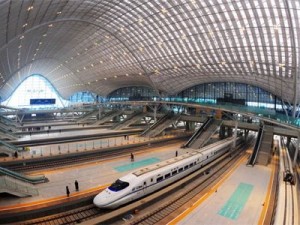 The only booties that were not shaking after Lula Washington Dance Theatre’s visit to Xian (she-yan) were those of the 3,000-year-old terracotta warriors.

The lively, Los Angeles-based, African-American dance troupe performed in Xi’an twice, both times to about 1,000 people. Everybody got all shook up.

The Xi’an shows were an up-front add-on to the main event of the 25-day tour:  a nine-day residency at SIAS University in Zhengzhou city, the capital of Henan Province.

LWDT’s mission (supported by a grant from the U.S. State Department): positive interaction with Chinese dance students and their teachers.

The California car addicts enjoyed the smooth, two-hour ride as the train whisked soundlessly above the verdant Chinese countryside.

Arriving in Zhengzhou were Erwin and Lula Washington and their seriously cute set of grandsons, Nelan, 8, and Veritus, 6. Joining the tour as well: Tyler Wilkins, 8, daughter of the dancer April. Also on deck, our intrepid arts·meme reporter. SIAS University President  Shawn Chen (click on his photo) made the residency happen, He reached out to the company back in Los Angeles, where he maintains his second home in San Gabriel. Everything was set to blast off three years ago, but the H1N1 virus kicked in instead, making a nasty dent in Chinese tourism.

The viral scare also put the kabosh on the dance tour.

Chen hosted an opening night bbq bash on the elegant patio of his riverside villa: smokin’ in more ways than one, you could barely see the guests, but that didn’t hamper a serious Chinese-American karaoke standoff.

All material will be shown in a big on-campus concert tomorrow night. And that marvelous jazz combo is still hanging around …

One comment on “Train to Zhengzhou for Lula Washington Dance Theatre”