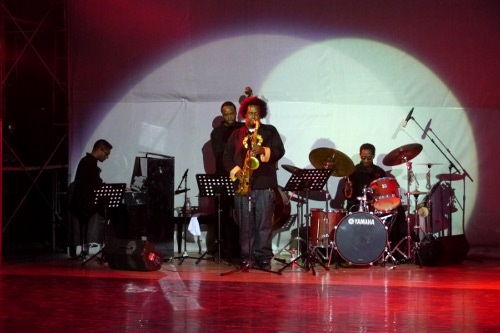 Four exceptional musicians, delivering a suite of band leader Marcus Miller‘s compositions, rose to the occasion when an audience of primarily Chinese undergraduates ran far afield from standard American jazz convention. The action and spontaneity in the house jolted the playing to a higher plane, propelling a seamless 40-minute set of high-impact musical expression. 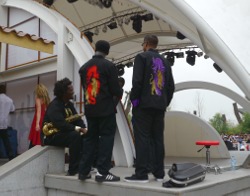 Pianist Mahesh Balasooriya, still in his twenties and playing as though forging a musical identity at every turn, imbued his solos with shapeliness beyond his years.  The pianist was first out of the gate, ripping syncopations from his keyboard that augured a percussive player. But then came his dreamy — and persistent– way of layering shimmering harmonies, his searching right hand trilling lightly and gloriously. Golden playing.

Stand-up bass man Ardom Belton, plucking, contributed rigorous underpinning but with nice swinging looseness, a horse hair away from funky. Soloing, he huddled bow in hand over his fiddle, bending his notes to elicit pleasing tartness.

Kamasi Washington, a large man with a wild head of hair, organized sound into stolid muscular bleets, but in Miller’s “Beautiful Serena,” he took off the lid and ran a marathon with his tenor saxophone to the crowd’s rapturous applause. A Chinese rock star was born. 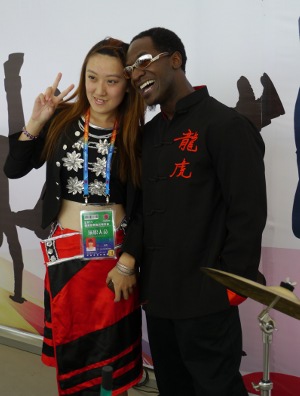 As a composer, Miller kept things straight ahead  — he built his final section on a repeating four-beat motif with the accent on count two, easy for jazz newbies to attach to. In his virtuosic playing, he pounded every possibility — and intricacy — that a drum set can deliver. It’s a percussionist’s fantasy to open up into the big Chinese sky, and Miller did let her rip. But mostly he stayed in check with his band, cooly commanding from his drum set.

The program opened with three Chinese chorale groups who did their level best despite the nonstop chatter in the house. But crazy things happened during the jazz set. When Miller exploded into drumming, the crowd talked back with the first of many spontaneous, marvelously timed, rounds of applause — not the standard, di rigeur post solo acknowledgement. Instead, a great roar arose like at a soccer match. Then there was a run on the c.d. sales table — during the show. No interruption could please an artist more. The quartet responded in kind, digging deeply into their material and delivering a full-throttled demonstration of American jazz.