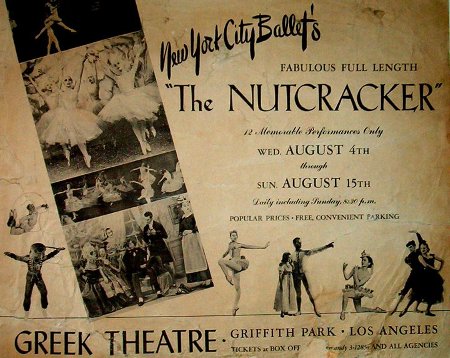 This fascinating poster — click on it for detail — dating near to 1954 when Balanchine first staged the Nutcracker [Maria Tallchief as Sugar Plum Fairy, Tanaquil LeClercq as Dewdrop] — comes from the collection of Edith Brozak McMann, a former New York City Ballet dancer. It may interest Los Angeles dance fans of a certain age who recall NYCB’s annual forays to the West Coast.

When I interviewed him in 2010, Arthur Mitchell erupted into peals of raucous laughter, remembering his time, as a very young man playing Puck in Balanchine’s “A Midsummer Night’s Dream.” [That would be sometime after 1962 when Balanchine created the role on Mitchell.] Performances were at Griffith Park’s Greek Theater.

The outdoor amphitheater gets pretty nippy — with the cold, wet Pacific Ocean air layering on — even on a midsummer’s night. Said Mitchell:

“It was so cold! The fog would come and people [the dancers] would be sliding because the floor was so slippery. And [the audience] loved “A Midsummer Night’s Dream.”  I ran around with no clothes on!

They had heaters [backstage] and I’d be standing there [he imitates teeth chattering], thinking, ‘oh my god, I have to make an entrance!’ [so loathe was Mitchell to leave the heater]”

What’s amazing about the poster above (a later poster, from 1959, at right) is that the troupe, which delivered Nutcracker annually in December in NYC, brought it to our balmy shores in August! 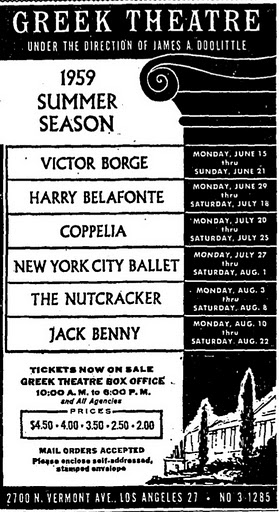 Suffice it to say this would never happen in today’s “holidays”-crazed Nutcracker-ania. But if you have a brand-new version of the Tchaikovsky ballet in your repertoire, why not show it off!?

Clearly the Los Angeles impresario, James Doolittle, was happy to do so.

“I inherited Janet Reed’s part as lead Marzipan Shepherdess my first year in the company ( 1958-1959) and I remember very clearly dancing it in LA. The reason being that the stage was slippery; I went to my knee from a double [pirouette] and continued sliding down into the Dying Swan position. But on the poster there is a picture of Janet Reed in Marzipan, so they obviously used original cast photos and maybe changed the print.  NYCB didn’t have much money in those days!!”

The thirty-minute delay would make the show an even harder nut to crack!