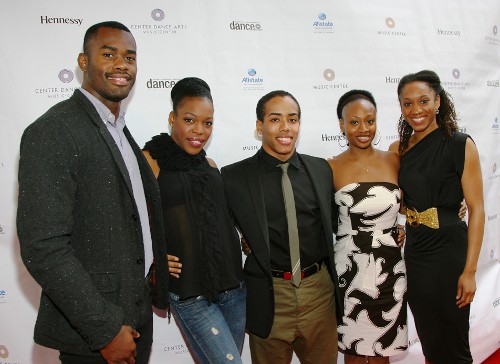 This line-up of good-looking people is an elite squadron — they’re dancers with Alvin Ailey American Dance Theater. Nice and fun people, too.

We had a chance to meet them at Thursday night’s packed and bustling party hosted by mega-couple Mattie McFadden-Lawson and Michael A. Lawson (here’s Michael hanging out with one of his good pals).

The Lawsons’ amazing home, dating from 1916, looks like this. Known locally as the ‘Ali Mansion,’ it nests 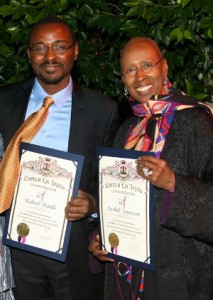 Gazing around the elegant turn-of-the-century sun porch where we were chatting, Judith Jamison said, “Wouldn’t it be great if dancers could live like this?” Trying to spin positively, I replied, “Well at least they get to go to a lot of cool parties.” Jamison, ever the dancer’s advocate, and a woman who does not suffer fools, shot back, “Visiting somewhere, and living somewhere, are two different things.”

The party welcomed the great dance troupe for an unprecedented long run at the L.A. Music Center — ten performances. It was also to acknowledge the passing of the baton of the company’s oversight from Jamison to the young choreographer Robert Battle, who has already set many of his works on the Ailey troupe. The two were honored with Los Angeles County plaques, photo at right.

At the opening night at the Dorothy Chandler Pavilion, Battle killed with his all-male predatory work, “The Hunt,” a well crafted hound-dog of a manly dance.