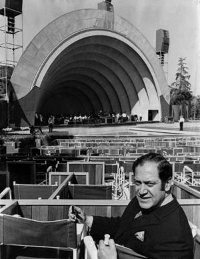 It was a privilege, last night, to watch Pierre Boulez conduct his own work from the late 1990s, “sur Incises,” written for a triplet of threesomes: three harps, three pianos, and three percussion clusters (xylophone, marimba, bells, tympani). A guided journey through a landscape of crystalline sound, the work clung miraculously to the air of its receptive container, the great Walt Disney Concert Hall.

From our behind-the-stage seats, we faced the rigorous Frenchman as he conducted. We also watched the tensed backs of the musicians as they untangled Boulez’s dense, speedy score.

“Renard,” episodic, and with outre lyrics for its four male singers, screams for a ballet. It was in fact choreographed by Bronslava Nijinska in 1922 for the Ballets Russes prior to her more enduring “Les Noces,” also set to Stravinsky. Both the composer and the dance maker would later live in Los Angeles, Stravinsky in Beverly Hills, and Nijinska in the Pacific Palisades, where she died in 1972.

A snippet of the Boulez piece here: