The second time ’round, Liz and Dick kept it simple 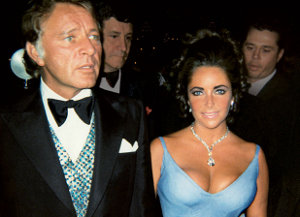 I’m starting late, but undaunted, I still aspire to catch up with Elizabeth Taylor in the marriage department (sans Fortensky). Here’s Liz’s list:

Details on the couplings on the Detroit Free Press website.

Our exclusive on the subject come from arts·meme friend, Caroline Graham, who recalls an important delivery she was tasked with while working for Cartier in London:

I worked for Cartier. I delivered the second set of wedding rings [to Liz and Dick] at Claridges. I handed them over to Richard Burton. They were a simple set of ivory rings. They wanted to keep it simple, wearing ivory bands. Burton invited me in and asked me to sit down. At least I met Burton in his bathrobe.

Photo, care of Vanity Fair:  Richard Burton and Elizabeth Taylor at the Academy Awards in 1970. Her necklace, the 69.42-carat Taylor-Burton diamond that Burton bought for her for $1.1 million.

Richard Burton and Elizabeth Taylor at the Academy Awards in 1970. Her necklace features the 69.42-carat Taylor-Burton diamond, which Burton bought for her for $1.1 million.