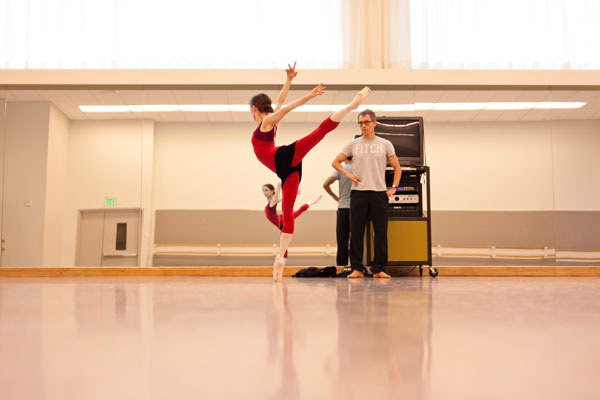 Opening on 20 January 2010 at the Orange County Performing Arts Center, er … update, the Segerstrom Center for the Arts, is the co-production with the Bolshoi Ballet, “Reflections.”

Preparing a feature story for the Los Angeles Times, I had the opportunity to chat with San Francisco Ballet principal dancer Maria Kochetkova (her astoundingly beautiful arabesque captured above; below, she poses second from left), the sole cast member to live and work in the U.S. Kochetkova describes leaving Russia, and the challenging solo the Finnish-born choreographer Elo is preparing for her.

“I won the Prix de Lausanne [2002], and I got to choose any ballet. I chose the Royal Ballet, I worked five years, when I experienced everything I wanted. Then I saw a San Francisco Ballet performance in London. I thought, ‘If I ever decide to change, I will go to this company.'” 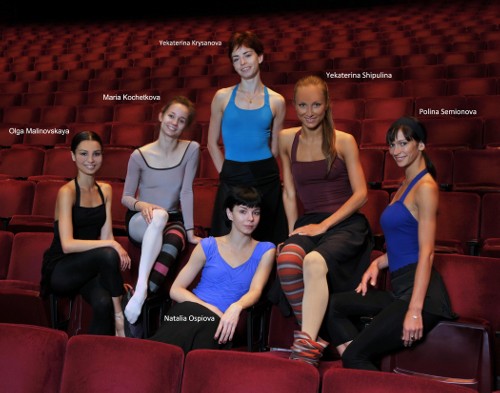 “I was inspired by everything I saw. But I knew nothing about San Francisco.”

“Probably there are three choreographers whose work I especially like: Christopher Wheeldon, he helped me so much to learn how to create movement. Yuri Possokhov, I feel like we have the same response to the music, and Jorma Elo, he was the first to make me move in a completely differently way.”

“For girls to do a solo five minutes long it’s very hard, it’s easier for a man. Sugar Plum is long but it’s not that demanding.”

“His [Elo’s] choreography is very demanding and hard. It’s definitely going to be a challenge. Everything is in contrast, when the music is loud , he makes me do nothing. He uses a lot of break dancing movement, incorporated with ballet [steps].”

One comment on “Maria Kochetkova & Jorma Elo rehearse for “Reflections””