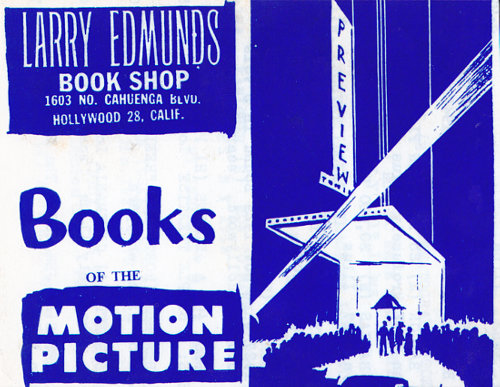 For over 70 years and through three locations, Larry Edmunds Book Shop has been a Hollywood institution, known the world over as the place to go for books related to the movies as well as stills, posters and other film-related memorabilia. Few today even remember that it wasn’t always so.

When I first set foot in Larry Edmunds location number two as a young teenager in 1963, the store windows were filled with eye-catching zoetropes, mutoscopes and other early cinematic mechanisms.  Inside there were a few movie books (not all than many had been published up to then), and a counter in the back where you could ask to look through files of still photographs, but movies represented only a small portion of the available merchandise. The west wall was filled with printed plays–Edmunds was the west-coast agent for the works of Dramatists Play Service–and the east wall was filled with books related to metaphysics and religion. 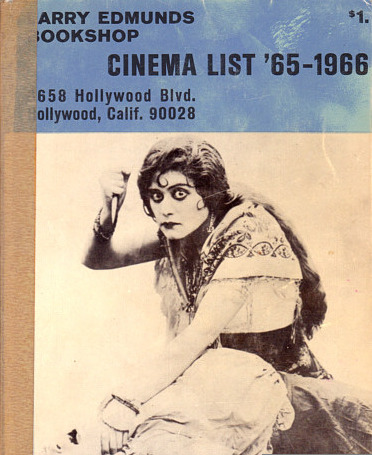 Fewer still would even remember that there was once a real Larry Edmunds.  Lawrence O’Connell Edmunds was born March 13, 1906, in North Carolina. In the 1930s he worked for legendary Hollywood bookseller Stanley Rose. Rose’s book shop, which stood next to Musso & Frank was a gathering spot for writers, though Rose himself is said to have liked writers more than writing. In The Four Seasons of Success, Budd Schulberg told  about a New York writer, new in town, who asked Rose: “Read anything good lately?”

“Me? I hate books!” Rose is said to have replied.

“Then how come you run a bookstore?”

“Cause I like to keep a joint where my pals can hang out.”

In any event, by 1940 Stanley Rose’s Book Shop was no more–the space becoming the even more legendary writers room at Hollywood’s oldest restaurant.

But Larry Edmunds, it seems, loved books, and around 1938 he set up his own shop at 1603 North Cahuenga Boulevard. If the business was a success, his personal life was not.  On August 8, 1941, he stuck his head in an oven and turned on the gas, supposedly leaving a note that read: “If you think this is easy you’re crazy.” 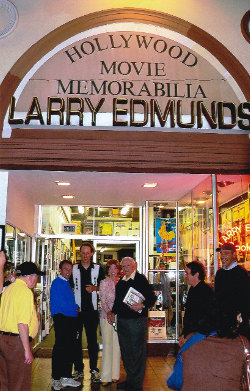 But it was Milt’s wife, Git Luboviski, who pushed the store in a new direction–figuratively and literally. Realizing that there had been no book catalog related to the cinema, she put together a small brochure of movie-related books–and they almost immediately sold out the entire list. Larry Edmund’s Book Shop would move to 6658 Hollywood Boulevard in 1954.

As publishers started churning out movie books in the 1960s, Edmunds’ general stock was gradually pushed aside. Larry McMurtry, no less, bought what the Luboviskis no longer had any use for.