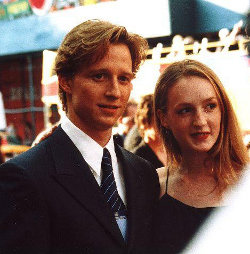 I read with interest the news that Ethan Stiefel and Gillian Murphy, two of America’s strongest home-grown ballet talents, got plucked by the Royal New Zealand Ballet, Stiefel as artistic director.

A nice move for a gifted and beautiful couple.

Even more delighted by the way Kiwi journalistTom Cardy cannibalized my descript in the L.A. Times of Murphy as ballet’s Scarlett O’Hara (read it in the box below). In the original article, a review, I mention that the British-born Murphy was raised in the Carolinas, reinforcing her southern belle image.

Will some enterprising choreographer please fashion a GWTW blockbuster ballet for this woman? Wouldn’t that be the Great American Ballet?

Two of the biggest names in the dance world are moving to Wellington in an unprecedented coup by the Royal New Zealand Ballet.

Stiefel, who trained alongside Rudolf Nureyev and Mikhail Baryshnikov, will be accompanied by his partner, Gillian Murphy. Both are principal dancers with American Ballet Theatre the United States’ national ballet company. In ballet circles, the pair have rock star status and are celebrities in the US. They are due to make guest appearances next month on television drama Gossip Girl.

The Los Angeles Times this year praised Murphy, 31, in Sleeping Beauty as the “redheaded vixen of a dancer with a peaches-and-cream complexion, a bow-tie mouth and sturdy American legs … She’s Scarlett O’Hara on pointes”. The New York Times ranked her as “one of the most exciting ballerinas of her young generation”.