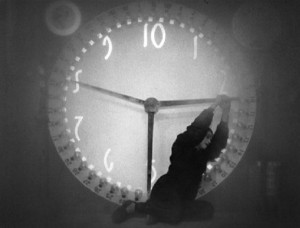 Fritz Lang’s METROPOLIS with 25 minutes of lost footage restored and live accompaniment by Alloy Orchestra: a huge event for cinephiles. It was the penultimate closing-night event of TCM Classic Film Festival.

Everyone loved it. Everyone except arts•meme … I found it overwhelming and incomprehensible.

What tickled me, however, was watching the acknowledged German masterpiece dating from 1927 while seated in Grauman’s Chinese Theater, a quintessential piece of L.A. fantasy architecture built half a world away, also in 1927.

What a movie house! Grauman’s Chinese, an elegant grand dame of cinema, whose broad swathe of cheerful rose-colored seats (okay, they’re not original!) slope gently down to a humongous screen, hosted, last weekend, four days of classic cinema. What a dream!

As an event in filmland, the first unfolding of “The King of Kings” on the screen took precedence even over the opening opening of a theater that in itself is a revelation of art and beauty. Grauman’s Chinese Theater is the ultimate word in construction and imagination, and will long be a fascination to beholders of the film creations that are shown within its doors….

… The house is a dream of beauty both in lighting and decorative effects — an Alladin’s wonder palace that will be visited by all who visit Southern California, or dwell here …