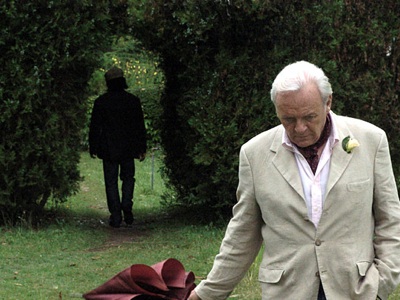 “The City of your Final Destination” is one of a roster of top films enjoying pre-release viewings at Farber’s Monday evening “Reel Talk” events in West Los Angeles.

Made four years ago on the cusp of the demise of Ismail Merchant, producer/partner to the 81-year old Ivory since 1961, “City” features the Merchant/Ivory trademark exotic locale — this time rural South America — and a translucent performance by Sir Anthony Hopkins.

Farber’s provocative opening question gets no takers from his largely middle-aged audience. The Hollywood Reporter and Daily Beast film critic, and author of several film tomes, presses on:  “Some of us hope to return to the place we originally called home,” he says. “Where we end up may not be where we would have imagined.”

The ease with which Farber forges intimacy in the house portends his series’ popularity. In fact many in “Reel Talk” filmgoers migrated from the critic’s similarly named screening sessions at UCLA Extension.

This is not the hip film crowd that flocks to East side outlets like REDCAT, the Cinematheque, or even LACMA. “Everyone knows that L.A. is geographically fragmented,” says Farber, “and many of my group do not go to [Hollywood’s] Egyptian Theatre.”

“I tend to attract an older group. They can make a commitment to a ten-week series. Also I know them. Many are retired film industry people. They want to keep up, and they are great movie lovers.”

“Hollywood has looked down lately on older audiences. But there are a lot of very passionate and loyal fans who see a tremendous number of movies,” he says, adding, “Look at Meryl Streep. She’s bigger than she ever was.”

Admits Farber: “I still have a lot of excitement about seeing movies. I may miss a lot of the mainstream fare, but I tend to gravitate to independent and foreign films.”

What’s his personal taste? “It’s very eclectic, but for me [the giants are] David Lean, Hitchcock, George Stevens, Truffaut and Fellini. I have special interest in the films of Sydney Lumet, who had such a long and vibrant career. And Phil Kaufman.”
REELTALK | Wadsworth Auditorium on the V.A. campus | Monday evenings, through June, individual tickets available