Readers zero in on Mostel 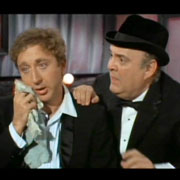 Anticipating a fun time at Reprise Theatre‘s A Funny Thing Happened on the Way to the Forum, I praised Zero Mostel, the originator of the role of Pseudulous in the Sondheim musical.

Zero’s Nero got a lot of reaction from arts•meme readers.

Ballet mistress Caprice Walker writes: “Great actor, Zero. Think of The Producers and Fiddler On The Roof! So much fun to laugh as hard as you possibly can while watching him perform.” 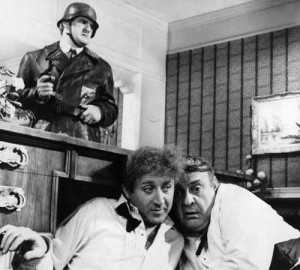 Yvonne Rainer, the great modern dance choreographer and filmmaker recalls: “In my memoir I recount a lunch I shared with a group of people, including Zero Mostel, in the late 50’s. I sat next to him, and he held the stage with jokes throughout the meal, sometimes eating off of my plate to make a point. He was the kind of comic who never slept, on and off stage.”

Author/cultural thinker and museum hound William Poundstone writes: “There are people who think Nathan Lane was great in The Producers, but I was spoiled by seeing Mostel beforehand. Lane is just a nice guy acting a funny role. Mostel is like a scary guy sitting across from you on the subway — he could be capable of anything.”