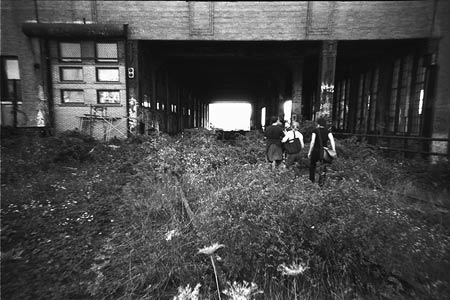 “Everything that’s built crumbles in time: buildings, cultures, fortunes, and lives,” says Ross Lipman, one of the world’s leading film restorationists who is also an accomplished filmmaker, writer and performer.

Lipman focuses his experimental films on urban decay as a marker of modern consciousness.

“The detritus of civilization tells us no less about our current epoch than an archeological dig speaks to history,” he notes. “Urban ruin is particularly compelling because it tells of the recent past, and reminds us that our own lives and creations will also soon pass into dust.”

Thank you for that reminder, Ross!

The above image is of New York City’s High Line, the abandoned elevated freight rail running through Manhattan’s west side that has been reconfigured into an aerial public park. Lipman explored this verdant wasteland when it was inhabited by taggers, wanderers, and cops only.

A preview of KEEP WARM, BURN BRITAIN!, Lipman’s intriguing filmed memoir of a squatting community in East London’s Docklands, reveals his skillful maneuvering of visual language — a precise but mysterious journey thru time and space. Recommended.