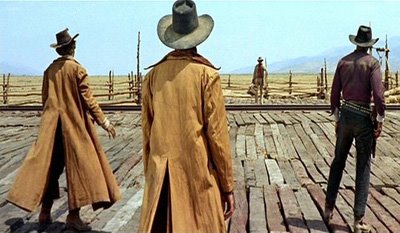 Concerning Sergio Leone’s epic masterpiece, “Once Upon a Time in the West,” what can a mere mortal possibly say? The scope, ambition, and perfection of this movie are of such gigantic proportion that it quashes idle chatter. You simply have to see it.

It’s my good fortune to live in Los Angeles where this film-of-all-films was properly projected on the Egyptian Theater’s vast (53-by-27-foot) screen.

Leone fan Michael Schlesinger, a former Sony Pictures exec who sits on the Cinematheque Board of Trustees, clarifies: “This “sound-free” sequence is actually “dialogue-free” as there’s only one spoken line (by the stationmaster) until Bronson shows up. The ambient sound (e.g., the squeeking of the windmill, the soft roar of the wind, the water dripping on Strode’s hat, the buzzing fly that annoys Elam, the eventual train whistle) is very much a part of the tapestry of the sequence. And all the more extraordinary since, like most Italian films of that era, especially with those multi-lingual casts, it was shot completely silent,” writes Michael in an email.

For just under three hours, we feast our eyes on cinematographer Tonino Delli Colli’s pitiless Wild West landscape; Ennio Morricone’s brilliant score twanging in our ears as Leone’s tough-guy fantasy unwinds in wrenchingly slow time. Henry Fonda, Jason Robards, Charles Bronson and Claudia Cardinale, all giving great performances, are our tour guides. Henry Fonda as Frank, the unrepentent bad guy, makes every Henry Fonda nice-guy movie  — that would be nearly all of them — worth the warm-up.

Schlesinger also sent this clarification: “True film geeks sit up close, not in the balcony.”