Rudi of the sixties 2 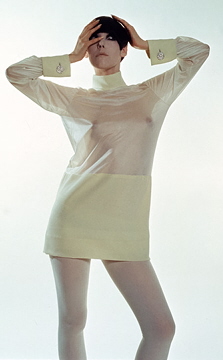 Not Rudolf Nureyev — although Rudi N also swung very hard in the sixties.

Our guy is Rudi Gernreich (1922-1985) the Vienna-born, Los Angeles-based fashion designer known for his zestful, pared down aesthetic. His clothes celebrated the youth and action in American culture.

Beyond his outerwear, Gernreich was a lingerie designer — who urged bralessness!  He eschewed bones, wires, padding and other claptrap of the atomic fifties. The Gernreich woman was natural and free — a Californian.

An Angeleno, he cared for swimwear. He made this fabulous geometric swimsuit. He is most renowned for the topless version.

Gernreich also experimented in new fabrics and materials, including plastic. That white mini dress in the photo is just totally fantastic. Roll over, Mondrian!

Gernreich will be honored at a benefit for the Museum of California Design held Sunday, November 22 at a private home in the Hollywood Hills. How great does that sound?

A very handsome man and a gay activist before his time, Gernreich also had a dance background. He performed with Lester Horton here in L.A. In fact, he was greatly inspired by movement and dancewear — leotards, tights, stretchy fabrics, and lots ‘o leg showing.

2 thoughts on “Rudi of the sixties”