ed. note: we are pleased to share words written by gallerist jack rutberg who shares memories of his special friendship with peter selz, just passed away.

I am saddened to relay the news that our dear friend Peter Selz passed away this morning. The impact that Peter made, and will continue to make, on the history of art is perhaps unequaled. He was not only a scholar, brilliant curator, writer and an uncompromising champion of art that moved him, Peter was above all a passionate advocate and a great friend. How fortunate I feel to have been at the UC Berkeley Museum of Art (he was its founding director) to celebrate his 100th birthday only weeks ago. Peter was active to the end. Amazingly, only days later, he attended an opening for a new exhibition he co-curated.

Peter Selz belongs to the pantheon of art historians and curators with a profound impact on the art of the 20th and 21st centuries. But he stands uniquely apart in that pantheon, as his impact goes far beyond his contributions to the canon of the art of our time.

Surely, no other leader in the art world has made as much of a mark as Peter, as his friendships with artists, gallerists, collectors, writers and curators are notable. Peter’s passions, confidence in his notions about art, and his openness to new ideas precluded the sort of academic elitism that often separates art academics from the very subjects of their interests. 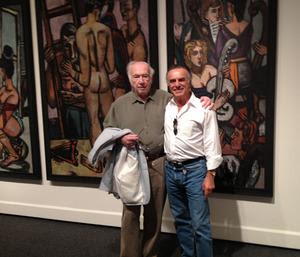 I have had the privilege of sharing the podium with my friend Peter Selz in museums in Berkeley, St. Louis, Washington D.C. and Los Angeles. Engagement has always been Peter’s passion, and how fulfilling it was to launch his formidable book published by UC Press, “The Art of Engagement” with an exhibition of the same title at my gallery in Los Angeles. It wasn’t our first dance together, and it wasn’t our last. We share passionate interest in artists championed by Jack Rutberg Fine Arts – Hans Burkhardt, Jerome Witkin, Patrick Graham and most recently, Jordi Alcaraz. Our “first dance” was prompted when Peter saw Burkhardt’s “Desert Storms” series and felt compelled to deliver a now widely published article at the International Congress of Art Critics in 1991.

Peter has every right to be jaded in his notions about art, but anyone who has been in Peter’s presence knows when he encounters a work that moves him – even by an artist new to him – his response is animated and excited, as you might envision of a boy with his first toy. No guarded posturing. Perhaps it’s because he has “seen it all” and is wise enough to know that he really hasn’t. Just consider a few touchstones in his long career that took him from Germany in 1939 to New York, where he looked up his cousin Alfred Stieglitz, then onto teaching positions in Chicago, before moving to Los Angeles where he became chairman of the art department at Pomona College and director of its art gallery, then back to New York, where he was appointed Curator of Painting and Sculpture at the Museum of Modern Art in 1958.

At MOMA he organized exhibitions that changed the course of modern art: The first retrospective in America of work by none other than Auguste Rodin, as well as Mark Rothko. Add to that major surveys of Max Beckmann, Jean Dubuffet, Alberto Giacometti, and the German Expressionists. His 1959 exhibition “New Images of Man” was critical in the advancement of many artists’ careers and a new perspective on contemporary art.

Attracted to Berkeley’s free speech movement, Peter went west in 1965 and became the Founding Director of the Berkeley Museum of Art, where he continued to organize major exhibitions. Through his teaching at Berkeley, legions of students flocked to study with Peter and continued on to distinguished careers as museum leaders and educators across the country. At the time of the demolition of the Berkeley Museum’s first building, Peter quipped, “Imagine – I’ve outlived the building!”

At the Berkeley Museum celebration of his centenary, Peter briefly took the stage with its current director, Lawrence Rinder. Peter’s message was that he had faith in the future of art – that good things are being created today, but above all, that great art must be the result of emotion and the integrity of following one’s passion.