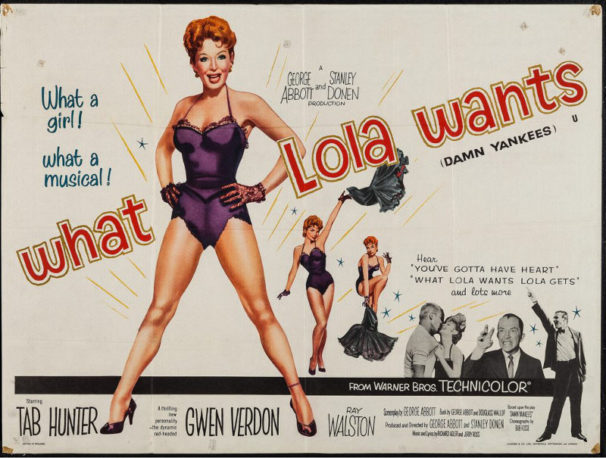 In a 1991 interview with Gwen Verdon on CUNY Television, the great Gwen describes her first encounter with Fosse as her choreographer for Damn Yankees.

I had seen [Fosse] at MGM studios. We had met at a party that Michael Kidd gave.

I had a reputation for being difficult … and I was.

I was difficult because I couldn’t stand bad dancing. I know that sounds … I just hated all that choreography that I used to call ‘animated wall paper.’ Where it was about nothing. As long as everything kept moving, it was choreography.

Bob had heard that I was difficult.

Michael Kidd once said, “Look, If you want to work with someone who doesn’t have a point of view — which makes them difficult work with — work with my sister.”

Bob loved to rehearse at night. He was a real night person. We were working in a studio at Walton warehouse. He said, look, I’m very nervous. And I said, So am I. I’m just going to show you this number. I’ll just do it. Well he was fantastic doing it. It was Lola.

The story of Bob & Gwen soon to come to FXNetworks.