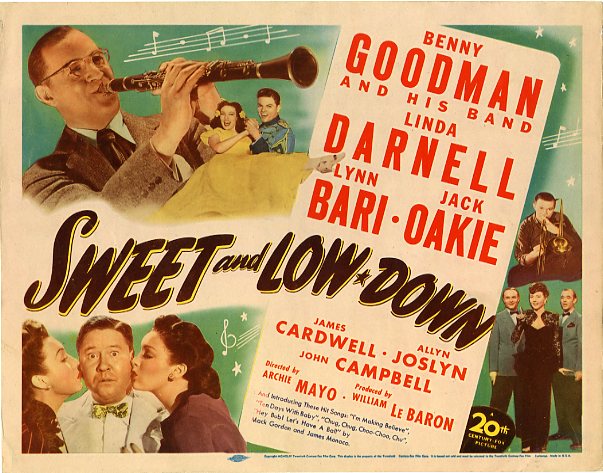 Cinecon 54, the dawn-till-midnight film festival of the arcane, the rare, the undiscovered-then-lovingly-embraced gems of early cinema, marks the end of summer, running, as always, through Labor Day weekend.

Festival has booked some very impressive in-person guests. The doyenne of Cinecon 54 will be Eva Marie Saint. Others include: Baby Peggy and Cora Sue Collins. Of great interest to arts·meme-ites are the nuggets of early movie musicals peppered throughout its four day schedule. Enjoy!

SWEET AND LOW-DOWN (1944, 20th Century Fox)
Thursday Aug 30, 8:30 pm
Benny Goodman and his band headline this comic, romantic, musical free-for-all directed by Archie Mayo. It’s WW II and Benny and the orchestra travel the country to entertain the troops at army bases. When Benny discovers a young trombone player and gives him a job with the band, the kid becomes an unmitigated egotist and his attitude starts to cause trouble for everyone. With Linda Darnell, Jack Oakie, Lynn Bari, and lots of swingin’ big band tunes. When the band arrives at a boy’s military academy (run by Dickie Moore!) things really start to jump!

No listed dance director, but there better be dancing or we’ll jump up in the Egyptian’s aisles! 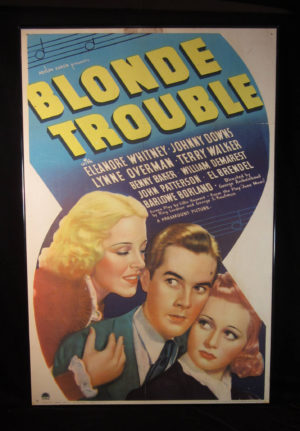 BLONDE TROUBLE (1937, Paramount)
Friday Aug 31 9:10 am
Based on the 1929 George S. Kaufman/Ring Lardner musical “June Moon.”
Romance blossoms on board a train when aspiring songwriter Fred (Johnny Downs) meets dental assistant Edna (Eleanor Whitney) as he heads off from Schenectady to Manhattan to look for his big break. Being a 1930’s musical he gets both the girl and a hit song. But first Fred has to contend with crooked song publishers and gold-digging women who set their sights on his life’s savings. With William Demarest, El Brendel, Spec O’Donnell.

Boris Morros is the music director of the film. No choreography credit.

KING SOLOMON OF BROADWAY (1935, Universal)
Friday Aug 31, 11:25 am
New York gangster “Ice” Larson is owner of the Broadway nightclub, Solomon’s Palace, but he’s doing time in Sing Sing. Meanwhile his debonair associate, “King” Solomon (Edmund Lowe), is running the joint. One night during a card game King loses the nightclub to Ice Larson’s main rival and he has only three days to come up with $64,000 to get the club back before Ice finds out. There follows a car accident, a new girlfriend, her rich uncle, a kidnapping, a gun fight and a number of night club acts! Want to see those nightclub scenes! 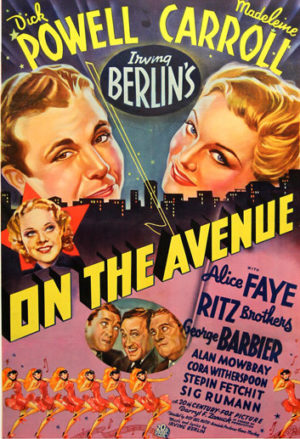 Monday Sept 3, 4:45 pm
When a new show opens on Broadway a sketch makes fun of an important New York family. The family members happen to be in the audience for the premier that night. Insulted, the daughter (Madeleine Carroll) goes backstage to complain to the Producer/Star (Dick Powell) but sparks fly and by the next morning the two are in love. That’s not such good news for the Star’s Co-Star (Alice Faye) who’s in love with the Star herself. She sets out to sabotage the romance… Starring Dick Powell, Madeleine Carroll, Alice Faye, The Ritz Brothers, also: George Barbier, Alan Mowbray, Cora Witherspoon, Joan Davis, Walter Catlett, Sig Ruman, Billy Gilbert, Stepin Fetchit. The standard “I’ve Got My Love to Keep Me Warm,” was written by Irving Berlin for this musical. Directed by Roy Del Ruth. Dance direction by Seymour Felix. Production boss, Darryl Zanuck. Looks good.