The flickering of truth, by Jasper Johns, at The Broad 1 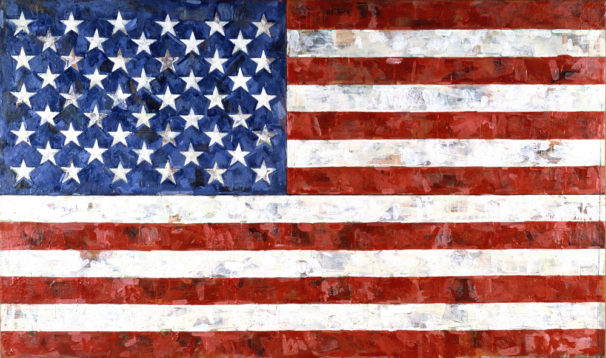 One hopes for something resembling truth, some sense of life, even of grace, to flicker, at least, in the work — Jasper Johns

When the first survey articles and books on Pop Art were published in the 1960s, Jasper Johns was usually included. The painter, sculptor and constructionist often depicted vernacular objects in his work and so was caught up in the critical dragnet. But Johns was never a card-carrying pop artist. American flags were a common motif in pop and Johns’ iconic “Flag” (1955) seems to have been the first example of investing all manner of meaning into our flag—apparent and obscured—in high art. It was the first of many iconic works from a quiet artist who has seduced and transfixed viewers ever since.

The new Johns retrospective at The Broad, “Something Resembling Truth,” assembles 127 pieces spanning 50 years. Los Angeles collectors and art patrons Eli and Edythe Broad have been collecting Johns for 40 years and, with the added loaners, the rangy grouping makes this an important exhibition. 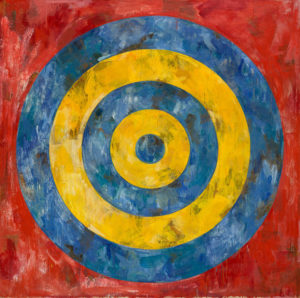 Johns has been critically canonized since the early ‘60s and much of the landmark Johns work is here: flags, targets, numerals and letter forms, table-size bronzes, and the cross-hatching paintings.

The show is laid out theoretically, rather than chronologically. Johns returned to the flag format many times and for different reasons. Where the ’55 flag seems to teem with subliminal evocation, “Flags” (’65) juxtaposes a green-and-orange banner juxtaposed with a gray one. Stare at the vibrating colors and then gaze at the gray; the eye transfers a ghost image of those colors onto the neutral field.

Pop was long on attitude and short on style; Johns’ work has been fairly attitude-free. His bronze, “The Critic Sees” (1964), like so much Johns, has a long fuse. An actual-size pair of glasses has a human mouth behind each lens. One forms the word yes, the other no. It’s easy to overlook the fact that the configuration is all part of a brick. It’s a jab to be sure, and a clever one at that.

Johns (born 1930) is a Southerner by birth, and he’s maintained a quiet and reticent public profile. His collaborator and long-time lover Robert Rauschenberg had a far better knack of gaining attention—through his work and his personality (film of Rauschenberg excoriating a collector for buying cheap and selling high tickled the art world in the ‘70s)—unlike Johns. Maybe that figures into why the Broad retrospective is the first major local Johns show since Walter Hopps curated a sizable survey at the Pasadena Art Museum in 1965.

Rauschenberg often had a kitchen-sink quality to his constructions. Johns’ landmark “Watchman” (1964) is his most Rauschenberg-like. A cast leg fragment shoots off the edge of a canvas—painted full of elements of enigma and portent. The extraordinary canvas in “Field Painting” (’63) has Johns using attached objects (brushes, beer can, letters), including a plugged-in neon light!

But simplicity seems to be where Johns has been the most comfortable. His prolific numeral lithographs seduce through graceful line and color. They celebrate draftsmanship, on one hand, yet return to the fundament of square, circle and triangle on the other. See how the ink on the miniature “Figure 7” shimmers exquisitely on a plastic ground; there are scores of such brilliant corners (as Thelonious Monk called them) in this show.

Like every other lionized icon, Johns has had his peaks and valleys (the ’70 didn’t contain his finest moments). But he’s stayed on the mountaintop longer than most and, even in this post-post-modernist world, he can still draw us in and hold us.

Jasper Johns: Something Resembling Truth | The Broad | thru May 13

One comment on “The flickering of truth, by Jasper Johns, at The Broad”