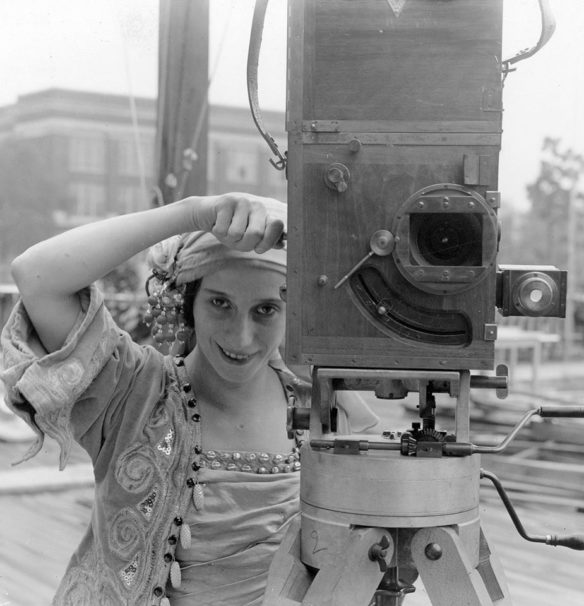 Smart stuff! The Dumb Girl of Portici (1916) was Universal’s most expensive film to date and featured an enormous cast, large-scale sets, and an ambitious story.

The film had a female director, Lois Weber.

But it also had what way more movies need — Wendy Whelan, Misty Copeland, Darcey Bussell, listen up! — a prima ballerina in the leading role!

Anna Pavlova plays Fenella, a wordless fisher-girl living during the Spanish occupation of Naples in the mid-17th century, who is seduced and abandoned by a Spanish nobleman. In Weber’s stirring drama, based on an opera by D. F. E. Auber, the betrayal of Fenella and the oppression of her people inspire her brother to foment a revolution. Now that’s a brotherly thing to do!

Your faithful dance-on-film fans at arts·meme have reported in the past about Pavlova’s visit to Los Angeles to make this movie. We also teased director Lois Weber about her teeming crowd scene in the movie.

Pavlova’s performance in the movie is no fluke or stunt—it’s a fully realized, deeply committed performance that reveals Pavlova to be, from the very start, one of the greatest movie actors, a charismatic and expressive actor who’s as forceful in repose as in action, as vital in quiet scenes as she is screen-bursting in melodramatic ones.

The Dumb Girl of Portici has been restored and is available on DVD and Blu-Ray, with a new score by composer John Sweeney.

More on Pavlova in this movie from Brody:

As Fenella, Pavlova brings dance to even the slightest and humblest gesture; she acts with her whole body, with gestures even in repose before she breaks into angular dramatic agonies; even alone, in contemplative reminiscence and solitary yearning, she choreographs Fenella’s inner world.

The DVD has bonus features, as follows:

arts·meme just got its copy and will report soon. Get ready for your close-up, Anna Pavlova.