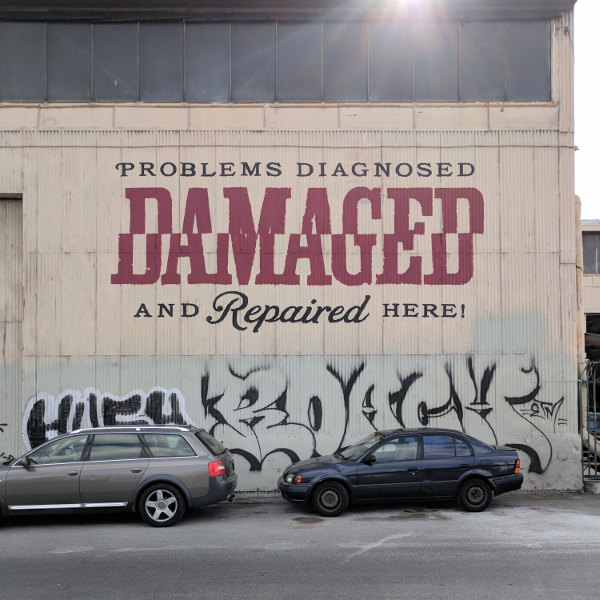 DAMAGED, Shepard Fairey‘s new exhibit in Los Angeles, is vast and beautiful. His graphic sensibilities and social commentary rattle the bars on the cage and give us the strength to break out.

Fairey is most famous for his poster HOPE used by the Obama campaign. In previous years, he littered our eyes with the image of Andre The Giant and the words OBEY stuck on every non-moving surface in L.A. The inspiration for OBEY came from the John Carpenter film They Live. (1988). Elements of subliminal mind control forcing a society to be docile and compliant consumers exist in Shepard’s work.

He freely acknowledges the sources for his inspiration and has put them into the world to support political and social awareness. The title of this show, DAMAGED, is from the 1981 Black Flag album. Punk revolt and anger at being abused and life being unfair. He credits John Van Hamersveld’s Jimi Hendrix poster and Endless Summer movie poster as great influences on his style.

By putting his posters and stickers directly onto the street he has circumvented the world of commerce — free to broadcast his own message. Though most of this work is sold, he is giving away much artwork to the public visiting DAMAGED, and donating to causes he supports.

Shepard’s graphic sensibilities are so attractive and effective that we can thank the art world for giving him a way to disseminate his ideas and make a living without harming us in society. Were he working for an ad agency as a graphic designer in the commercial world we would all be smoking the brand of cigarettes he was paid to sell us.

Just as a wine has the flavor of its soil, Shepard has taken his influences and carried them to a high and personal level. Making the world more aware of the lies being sold to us — and the possibilities we have to make it better.

Dana Ross is a photographer working in art and culture in Los Angeles. His live speaker series is Culture And Music.