It was nice watching the at-home manner in which LACMA CEO Michael Govan toured the cascading galleries of “Moholy-Nagy: Future Present” during the impressive show’s opening week in February. The highly recommended exhibition of 250 works by Laszlo Moholy-Nagy, a visual master much known for photography and filmmaking, will close on June 18.

Sure, the LACMA galleries are more or less Govan’s living room. The show seems like a particularly good fit not just for our city, but for the museum head who is known for his penchant for artists who incorporate new technologies.

Moholy-Nagy was all about that, and in the most prescient way. The distinguished traveling exhibit co-organized by LACMA’s Carol Eliel (seen at right with her boss) and curators from the Guggenheim Museum and the Art Institute of Chicago covers nearly all the formats engaged by the Hungarian-born painter/photographer/sculptor/filmmaker.

The works of this preeminent 20th century artist are now on view in a 20th century city. Despite his relatively short career (1918 – 1946), Moholy made his mark.

“He seemed to presage everything in art today,” noted Govan in private gallery conversation with arts·meme. 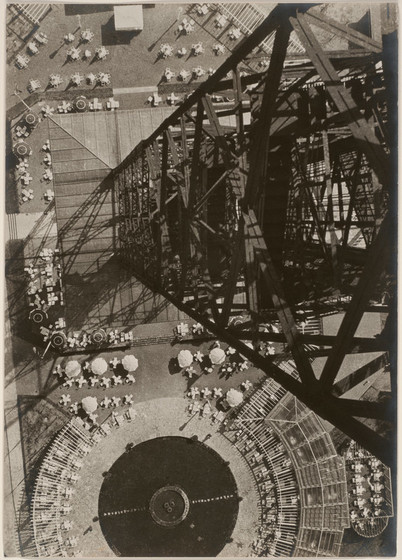 What made Moholy such a modernist is startlingly apparent in the work. A perfect example at left: the high viewing angle that no human could access without intervention of the gods.

Or an elevator. Or an aeroplane.

Govan elucidated: “Moholy worked in multimedia, taking a cross-genre approach. He was a kind of polymath in art. He had an organizational approach to his work that is after my heart. And he utilized photography, collage, and media in ways that impacted the advertising world. In his last years that became his most important form.”

In viewing the installation one is struck not just by the elegance and polished nature of the work, but also how the artist, who traversed the first half of the twentieth century — in many ways a nasty time — adapted every possible gadget to channel his vision of his evolving universe. He didn’t demur; he didn’t shrink back; rather, he kept up.

Famously (and of special interest to our town), Molholy was an artist of the camera, generating both still and motion pictures. He also took as his subject the built environment, i.e., what man hath wrought. This is a guy who liked a good bridge and tunnel. In the stunning image above, he appreciated a good radio tower. But he was a tremendous abstract artist as well. 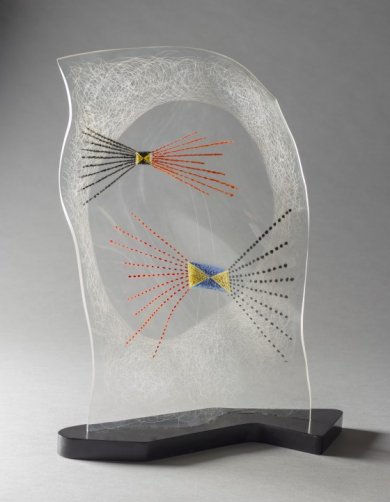 Particularly revelatory are the late-career suspended sculptures of plexiglass and metal wire. They’re so good. They’re so gorgeous.

Said Govan, “I admire his kinetic use of light and space … the kinetic relationship light has with his objects … his sculptures that are not fixed … as life is not fixed. And the sculptures throw off shadows — and the shadows exist separate to the art.”

“He used contemporaneous materials, most prominently plexiglass, adapted from war technologies. This is something Los Angeles artists did after World War II, with resins and plastics. But Moholy did it first.

“Moholy lived in terribly difficult times, times way worse than ours,” said Govan, providing context. “This show demonstrates that the arts survive all.”