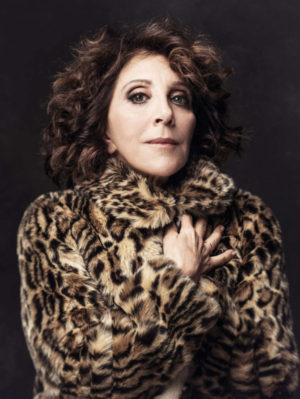 We so enjoyed last night’s cabaret-style performance by actress Andrea Martin, accompanied by her versatile sidekick (every woman needs one) Seth Rudetsky.

Paying respect to her Armenian family background, the multiple Emmy Award-winning and two-time Tony Award-winning actress (Pippen, 2013, My Favorite Year, 1993), in wonderful voice, delivered a lively hodgepodge of comic songs and ballads, character sketches, nostalgic videos, and personal reminiscence. Then came the best: kvetching and moaning about life in the entertainment fast-lane. We all love learning that a talented, slender, beautiful Broadway star, who at a certain age can still navigate a stage in spike high-heels, has tsuris! Martin, a trouper abundantly at ease before a live audience, brought with her great news of her NBC television series “Great News,” produced by Tina Fey. 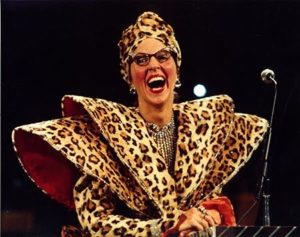 This lady is forever enshrined in arts·meme hall of fame for her brilliant comedy sketches as part of the legendary tribe at SCTV — it included Catharine O’Hara, Martin Short, John Candy, Eugene Levy, among others. Wrongly considered the shadow group of Saturday Night Live, SCTV in fact formed a vivacious precursor with several crossovers of personnel.

Martin belongs to a rarefied elite of female character-comics (oddly, all brunettes) that includes Elaine May, Gilda Radner, Lily Tomlin, and lately Tina Fey. Somehow Martin combines being super pretty, super approachable and super ready to go waaaaaay out on a crazy limb in a way that makes her my favorite.

The benefit evening for a very good cause — the aid of Armenian women and child victims of domestic violence — included a delicious Armenian-food-inspired buffet and bar. A very good time was had by all.

2 thoughts on “Andrea Martin, beautiful & funny, in support of Armenian women in need”