At first blush, one hundred songs from any artist seem like overkill. In the case of Ella Fitzgerald (1917-1996), whose recordings number in the thousands, one hundred is just about enough to take her measure. The beauty of the proposition is that her Decca and Verve titles, from which this set is compiled, comprise Ella’s best and most important recordings.

She was one of the greatest singers of the 20th Century. Her virtuosity included sure-footed musicality, rhythmic mastery, an indefatigable ability to swing, and a propensity for leaving her audiences deliriously happy. She was a major interpreter of American popular song, a lilting song stylist with a sunny delivery, and a scat singer whose stream-of-consciousness daring allowed her to stand toe-to-toe with any horn player. 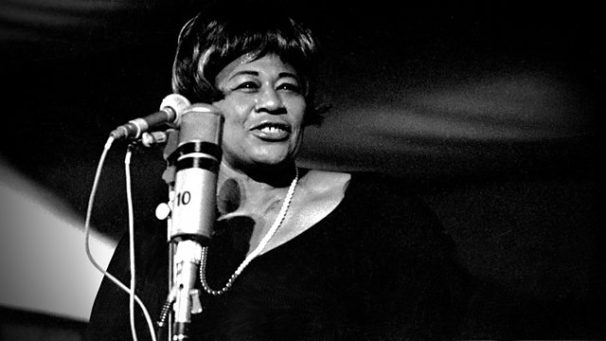 Ella’s style was wholly personal and it existed outside the canonized Bessie Smith-to-Billie Holiday-to-Dinah Washington continuum. Their blues-based jazz wasn’t part of Ella’s training. As a girl in Yonkers her main passion was dancing and it’s not hard to see how Ella’s grasp of physical rhythm and synchronicity informed her way with a song. Her only discernible vocal model was Connee Boswell, a white New Orleans pop singer with a good sense of swing.

Billie Holiday (1915-1959) was her contemporary, but they weren’t competitors. They each had traumatic childhoods (Ella lost her mother, was orphaned and lived on the streets for awhile) but they processed their troubles differently. Billie seemed to continually look for new illicit thrills, and Ella preferred not to dwell on what she found distasteful. Where Billie couldn’t help but peer behind forbidden veils, Ella kept her darker curtains drawn.

Billie mixed emotional disclosure that bordered on exhibitionism with an alluring sexuality. The venerable Ella didn’t trade in eroticism. Her fans didn’t expect emotional catharsis–they came to be entertained and to experience the exhilaration of her swing.

Still, very little about her biography explains how a plain teenager who never knew her father and was orphaned became not only one of the greatest pop singers but an iconic jazz vocalist as well. 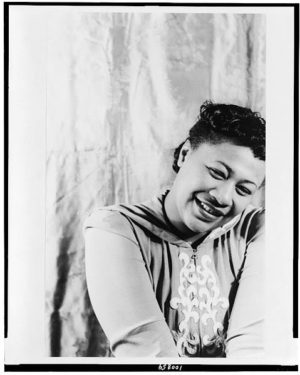 On a dare, fifteen-year old Ella entered the amateur contest at Harlem’s Apollo Theatre. For a version of Connee Boswell’s arrangement of “Judy” and three subsequent encores, she won $25.

On the amateur show circuit, the teenage Ella followed the bands that played weeklong stands at the downtown Manhattan theaters. A matinee of a movie, a newsreel and a stage show anchored by the orchestras of Basie, Ellington or Woody Herman was her delight. She was a fan of the music and that enthusiasm for the music and the people who made it was something that never left her.

Decca gave her a swinging chart on a children’s song, “A Tisket A Tasket,” and Ella created a pop milestone from a trifle. Not all of her Deccas were number one hits, but it’s surprising how many of them charted.

In 1947, Ella married the great young bassist Ray Brown. Fresh out of the Dizzy Gillespie Orchestra and innovating a cutting-edge bebop style on his instrument, he brought Ella into the fast lane of modern jazz. On the road with Granz’s Jazz at The Philharmonic tours, Ella was the only vocalist. She learned to hold her own with saxophonists like Illinois Jacquet and Flip Phillips and drummer Buddy Rich. Her 1949 “Lady Be Good” is a landmark in scat singing and a superlative example of how she could take musical chances and land on her feet at a breakneck tempo. 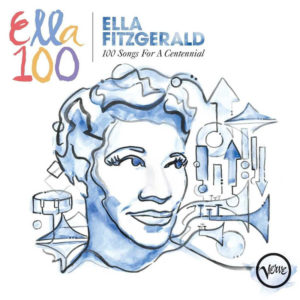 Verve owner Norman Granz seemingly recorded Ella every time she stepped off the tour bus or the airplane, and in a dizzying array of repertory. The songbook series, essaying songwriters Cole Porter, the Gershwins, Rodgers & Hart, Duke Ellington, Harold Arlen and Johnny Mercer helped solidify her standing as an iconic voice in American song. Granz revisited the pairing with Armstrong, and their Porgy And Bess album showed her to be a mature singer who could give as good as she took with the legendary trumpeter and singer.

Max Bennett joined Ella’s trio of pianist Jimmy Rowles and drummer Larry Bunker just in time for her engagement at The Mocambo, the A-list Hollywood supper club on Sunset Boulevard in October 1956. “She didn’t hang out and she didn’t party. We’d work out arrangements pretty quickly and she seemed happy with the way everything went. But boy,” Bennett enthused, “when she opened her mouth and sang her voice was like a horn—so flexible, and always just right.”

Bennett who brought the song “Fever” to the attention of another of his bosses, Peggy Lee, and contends with certainty: “Ella was the best scat singer I ever heard.”

There are legions of Billie Holiday-influenced singers and a fair amount of outright imitators. While Ella opened doors for vocalists, her originality and force-of-nature musicality has defied cloning.

There was nobody like her. And no one has yet come close.