Alma would be happy. Celebrating the UCLA dance department, the nation’s first 7 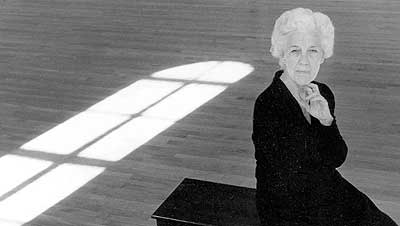 It was nearly an uproar; a spontaneous outpouring of love and appreciation filled the room when the image of Alma Hawkins, the founder and guiding force behind the dance program at UCLA (now called World Arts and Cultures/Dance), was flashed on an on-stage screen.

“A Celebration of UCLA Dance 1962-2017” was not the anticipated turgid tribute event. Instead, a real surprise, the audience howled its way through a raucous, super personal, often laugh-out-loud-funny feting of the nation’s first accredited college dance program marking 55 years of existence.

Many of the gathered alumni traveled distances to attend the birthday party/dance concert/Friar’s Roast. In the back of the house sat dance patron Glorya Kaufman, whose magnanimous philanthropy allowed for the renovation of a former girl’s gymnasium into Glorya Kaufman Dance Theater, the black-box performance space where the event took place.

Of course there were men in the house too. But hey. Emma Lew Thomas, a friend of arts·meme and many more, also received a wonderful shout-out. Lew originated the idea to throw this big happy party. (It was Lew who noted that Alma, who died in 1998, would be happy.) Attendees also included the wonderful Yemenite dancer Margalit Oved and Judy Gold, an alum who went on to oversee dance at Santa Monica College. 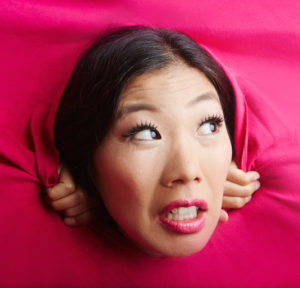 Popkin’s smart stroke was to engage as emcee the comedienne Kristina Wong, who dropped dry bon mots all over the stage. Who’d a thunk dance could be funny? (Not this dance critic.)

Wong displayed true grit in loosening up an audience of basically academics, zinging herself and the art form. She changed the temperature of the room in a good way.

There were wonderful performances. Onto the stage scattered the Lula Washington Dance Theatre, a company with deep roots at UCLA. Washington, a proud graduate (husband Erwin, the company exec director, a UCLA grad; daughter Tamica a UCLA grad), never looked back after earning her degree in 1984. She has been contributing dance to the Los Angeles community, and beyond, ever since. 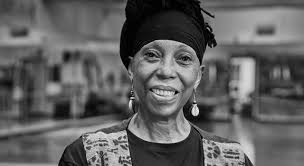 Washington’s dancers look so smart in their pristine white costumes — flowing for the ladies, grippingly tight for the guys —  dancing in Washington’s “Open Your Eyes” to music by Earth Wind and Fire. At the dance’s finale, out poured Washington’s recurring message of positivity, love and connection, as dancers spoke in epigrams, using a secret sign language, transmitted directly to the audience.

A double-dipper at UCLA is lanky Kevin Williamson, who earned both bachelors and masters degrees at this dance department. Williamson likes to tease audiences by ignoring his long legs, ignoring his long arms and torso, and drilling into minutia of gesture. This fun contrast he wonderfully delivered. 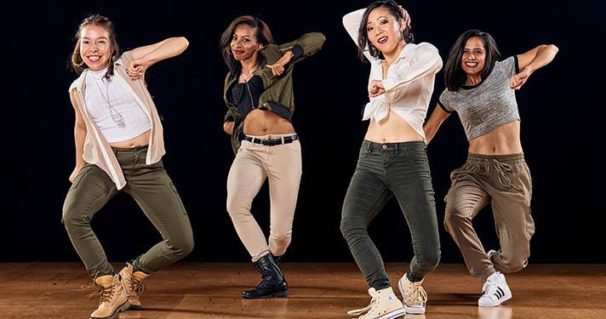 Jackie Lopez‘s hip-hop crew, Versa-Style Dance Company, then kicked it hard in “Barrio Mundial.” Lopez, a 2004 UCLA dance alum, stunned with her wicked onslaught of heavy, pounding, beat-driven movement. She herself reigned at the always-moving center of her hugely diverse dance company. Not just fun, not just joy, there was an impressive discipline on view — of spacing, of expressiveness, of honoring solo artists. That made it much more than just “street dance.”

From the look of her, they don’t make ’em like Alma Hawkins anymore. She hearkens the can-do spirit of the matriarchs of modern dance — reminiscent of Martha Hill, who perpetuated dance at The Juilliard School, lately the subject of the documentary, “Miss Hill, Making Dance Matter.”

New York had Miss Hill; Los Angeles had Miss Hawkins. Nothing, certainly no man, could stop these indomitable women. Hawkins holds a special place in my heart because, in the most unlikely of hires, she engaged Jack Cole to teach a select group of UCLA graduate students in 1973-74, at a time when the moguls of Hollywood seemed to have lost Cole’s telephone number. And there, at UCLA, Cole was teaching at the time of his death. I have interviewed several members of the UCLA Cole group; they are, well, great people. Passionate, eloquent, devoted to dance and devoted to the memory of Jack Cole. He rocked their world, a life experience for which they, and those gathered Friday night in a post-event reception quaffing sparkling wine, all have Hawkins to thank.

7 thoughts on “Alma would be happy. Celebrating the UCLA dance department, the nation’s first”