Pasadena Museum of California Art goes to the beach 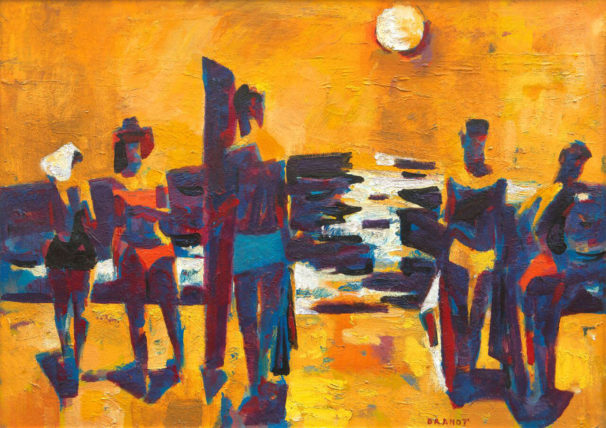 Our winter is unusually wet and cold at the moment, making visits to our beaches prohibitive. The evocative exhibition at the Pasadena Museum of California Art, “In the Land of Sunshine: Imaging the California Coast Culture” (through February 19), will punch the emotional buttons of anyone who has sand in the shoes of their psyche.

Gordon McClelland has curated many marvelous coast-themed shows (including the landmark 2007 Rick Griffin retrospective at the Laguna Art Museum); he assembled this impressive overview of California Coast depictions. Painters like Raymond Yellin, Edward Hill, and William Coulter found the Northern California coast irresistible as subject matter by the end of the 19th Century. But the inclusion of Hashimoto Sadahide’s 1862 woodblock print “Departing San Francisco” shows that the subject matter attracted artists from all over. 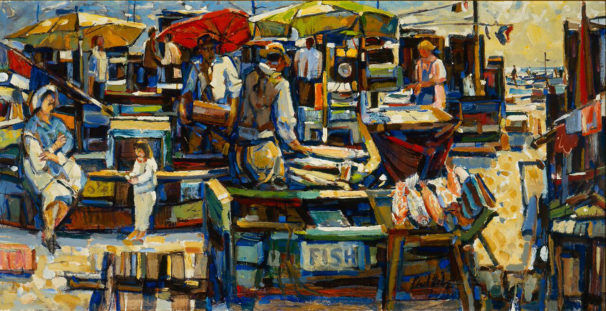 In the early 20th Century, art colonies took root in La Jolla, Laguna, Santa Barbara and elsewhere. Modernism asserted itself into bucolic imagery: Phil Dike’s “Offshore View” looks at the palette knife-blocked palisades of Cambria from the water, while his teeming “Newport Fish Market” (both from the 1950s) breaks the street scene into vibrant shapes and colors. Max Beckman’s rough-hewn shapes from the Weimar Republic are hinted at in a Long Beach scene; while the exquisite color bleeds in Dong Kingman’s watercolor exploit the medium’s capacity for serendipity. 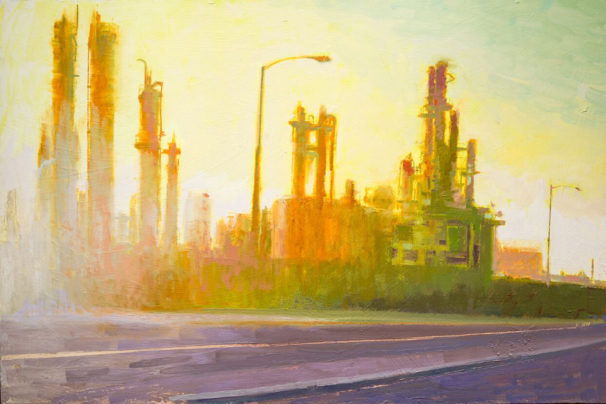 One of the show’s delights is the discernible changes in light and color in different locales. The turbulent greys, browns and indigos of the Northern California bays and beaches are unmistakable yet distinct. So too is the signature ennui of the diffused oranges, greens and violet greys of William Wray’s “Wilmington Refinery” (2016). 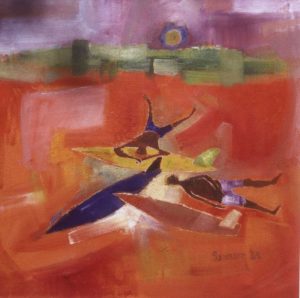 It’s not surprising that McClelland would assemble a knowing wing of the exhibit to surf culture art. Surfing had been depicted as early as the 1930s in serious art but commercial images like “Family Beach Scene” (1952) by Ren Wicks shrewdly played up the idyllic life at Santa Monica Breach. 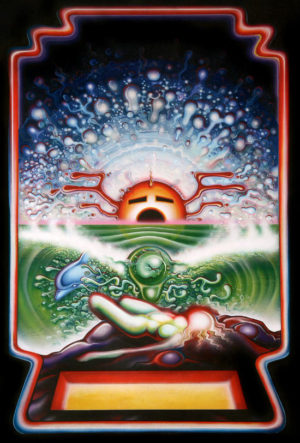 Slick and smooth in reproduction, the acrylic-on-Masonite article has an under-painting impasto, discrete airbrush highlights, and fine accents worthy of hotrod pin-striper von Dutch. The icon for ‘70s surfers walks the tightrope of being richly labored yet not overworked.

A friend grew up in Philadelphia and I once asked her when summer rolls around, what people in that city do for a beach experience; a nearby lake, maybe? “Oh we just get in the car,” she said, “and drive three and a half hours to the Jersey shore.”

In that regard, Pasadena isn’t so terribly far from the beach. Drop into the PMCA.

In the Land of Sunshine: Imagining the California Coast Culture | Pasadena Museum of California Art | thru Feb 19