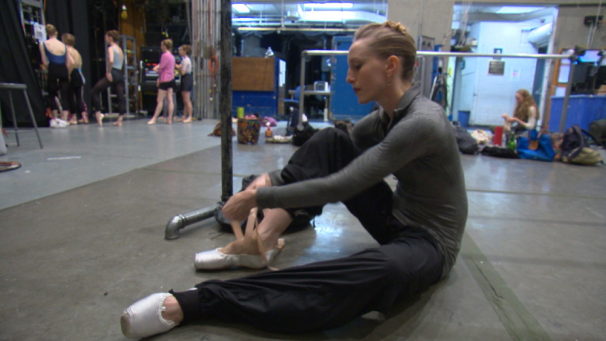 We all have problems, right? In the case of Wendy Whelan, the equivalent of a prima ballerina assoluta if only New York City Ballet had that designation, the problem in dance season 2013-14 was how to gracefully exit the stage and transition to civilian life.

For thirty years, the reed-thin, Kentucky-born ballet-thoroughbred reigned as the paramount goddess of NYCB’s post-Balanchine stable. Whelan was a cult item for ballet connoisseurs: the most limber, the most musical, the most versatile, the most ethereal, she nearly embodied dance-ecstasy as a performer. But as we are repeatedly instructed in “Restless Creature: Wendy Whelan,” a new documentary just screened at the New York Film Festival, for a dancer all things must pass. You don’t get more than thirty years of sustained rapture. You also learn that not only was this great American dancer blessed with a pliant, accommodating body that spared her the debilitating injuries suffered by her peers, she is a super nice person, gracious and beloved by fellow dancers.

Sometimes super nice people don’t make great documentary fodder. And that is unfortunately the case with this unilluminating film that takes a nose-length view of its subject — exercising zero critical distance. Remember Wayne’s World? Welcome to Wendy’s World. Total immersion! Co-directors Linda Saffire and Adam Schlesinger and camera crew track Whelan down city blocks, into taxis, and through wine-and-cheese parties as she gradually faces the waning of her stage career at City Ballet. An end so catastrophic, it’s tantamount to the end of life itself. It’s instigated by an unsubtle nudge from her boss, Peter Martins, who heads up the company and remains, in this movie, a great cipher of the dance world. That negative encounter spurs Whelan’s first-ever injury: a nasty hip problem.

Never had hip surgery? Not to worry. “Restless Creature,” the film, will take care of that. In the making of this movie, Whelan opened her life to a production team that self-reverentially, in a post-screening Q & A, called its format “cinema verite.” In that guise, viewers voyage into the surgery theater and observe Whelan’s beautiful butt go under the knife. It’s a brutal bringing down of an elegant woman. Would that the filmmakers journeyed beneath the surface of her career with the rigor employed by her orthopedic surgeon.

What defines a Balanchine ballerina? How did Whelan advance that definition? What do dance critics think of her? (We see two significant ones in the film, but they are not used as experts.) What were Whelan’s great roles? How do fans feel? Could we witness footage of her dancing at her peak? What special toll does the extreme technique practiced at NYCB extract on body and soul? How did Whelan’s predecessors fare in their retirements? Could Peter Martins have been prodded for more than minimal praise for his great soloist? And not to be a stickler, but how did an artist the caliber of Whelan eclipse counseling services for aging dancers like Career Transitions for Dancers? She readily admits to the camera that, unlike many of her colleagues, she approached retirement with no game plan whatsoever. This makes her appear less like an modern woman and more like a ballet victim — with a serious performance addiction.

These critiques will not put balletomanes off the film. I, too, would not miss it. She remains a dance-world treasure with her recent explorations of contemporary choreography. High praise belongs to film editor Bob Eisenhardt who melded footage like butter. It glides.

One comment on “Review: ballerina Wendy Whelan in new documentary”