Rebecca Bruno’s walk around time at the Norton Simon Museum 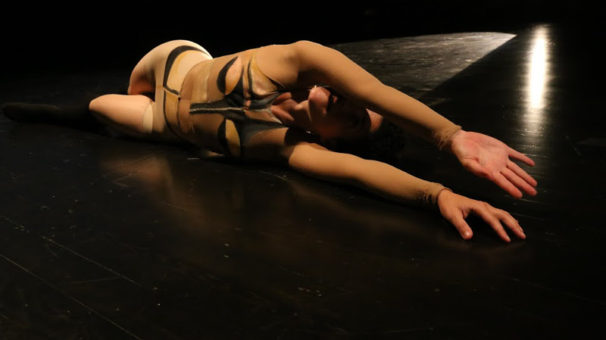 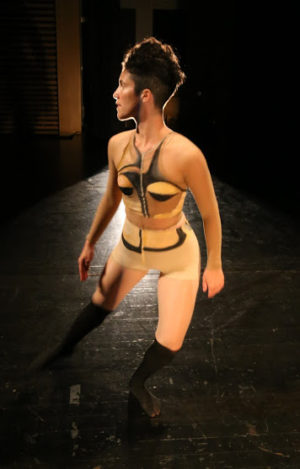 I like costumes and coifed hair on dancers. Big thumbs up. That’s only one reason I so enjoyed dancer/choreographer Rebecca Bruno’s solo outing, “Unfinished” at the Norton Simon Museum last Saturday afternoon.

The intriguing hour-long work set to cool music by Sam Widaman and atmospheric scenic design and lighting by Yann Novak also came equipped with cool hair and a cool costume.

Bruno filled time and space in a somewhat solemn and highly punctilious manner as it spooled before a rapt audience at the Norton Simon’s intimate auditorium.

The performance piece arose from each collaborating artist’s response to an exhibition now on view at the exquisite Pasadena museum, Duchamp to Pop .

One of the dancerly synergies with the exhibit was Bruno’s choreographic quoting from Walkaround Time (1973), a seminal work by Merce Cunningham inspired by Duchamp and set amongst his sculpture.

“Each of us came at it on our own,” said Bruno, chatting by phone, referring to her creative team. She expressed particular admiration for the Cubist-inspired costume, hand-painted and constructed by Lynn Ellen Bathke.

Bathke’s striking work was a tidy nylon body stocking worn so well by Bruno in the accompanying photos.

Bathke, an art textile conservator, makes extensive use of nylon in her conservation work, as an under layer for working on historic garments. In this case, Bruno’s body-tog was constructed from women’s nylon pantyhose.

Bathke explained her process by phone from Chicago:

“I used four pairs of nude panty hose with varying degrees of opacity. I distributed the opaque areas, which ranged from solid black to sheer nude. The crotch was cut out of the top bodice layers, and used as the head opening, while the legs were used as sleeves.

Why pantyhose? “First there’s the fact that I am a woman,” said Bruno with a laugh. “But we were also both inspired by the work of the only female artist whose work is represented in Duchamp to Pop, Vija Celmins.