A tradition of dance carries forth at the Norton Simon 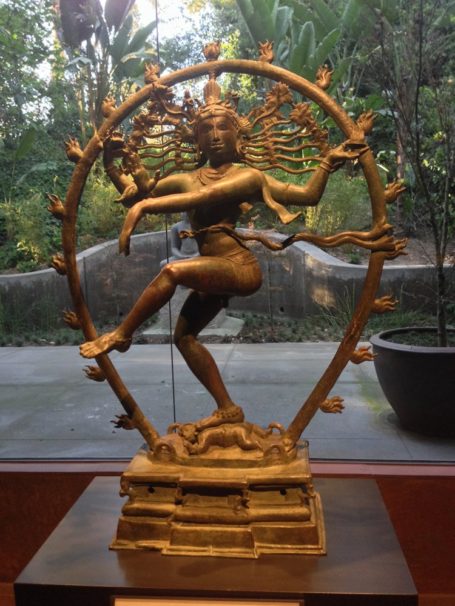 This gorgeous statuary — Shiva, as the Lord of Dance — reigns supreme in the Norton Simon Museum’s distinctive collection of Asian art, and has done so for many years. Curators explain the statue as follows:

In his dance of bliss (ananda tandava), Shiva displays both destructive and regenerative powers. He holds in his right hand a double-sided drum, representing creation; in his left hand is the fire of destruction and transformation, exemplifying his role as the destroyer at the end of each world age. This balance of power takes place during Shiva’s dance, which the sculptor depicts in dramatic fashion. Shiva stands on his bent right leg, while his left leg and foot are raised across his body. So vigorous is Shiva’s dancing that his locks of matted hair become loosened from their once-tight formation.

Shiva’s presence in Pasadena adds dimension to a dance concert Saturday evening at the Norton Simon. The choreography by Rebecca Bruno is also inspired by art: the museum’s exhibition Duchamp to Pop, and in particular, the exhibit’s only female artist, Vija Celmins. The dance performance, video and sound installation celebrates the proximity of art to life in connection with the exhibition. It questions completeness in art; what constitutes a finished performance. It takes into account some of Duchamp’s concerns with transparency, motion, the role of the spectator and the way in which the eye sees.