To higher musical spaces and places, with Jacaranda

Chamber music, a relatively portable art form (relative to, say, a symphony orchestra), in May climbed our city’s peaks in celebration of The Big Vista, the annual summer party of our top-favorite contemporary-classical music series, Jacaranda. 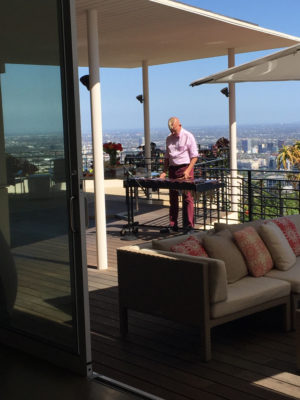 Bundling repertoire culled from the edgy, the new, and the yet-to-be-imagined into stimulating, curated concerts for receptive audiences in Los Angeles since 2003, Jacaranda is also renowned for its wonderful fundraising parties.

At a Valhalla also known as Beverly Hills, a celestial gathering opened with a startling and rather hilarious vision.

It was the great pianist, Gloria Cheng, a maestro, a doyenne, an empress of the keyboard, scrunched into a front-door hallway, hammering on a hot-red baby grand piano.

An instrument of truly baby proportion … every home needs this decor! 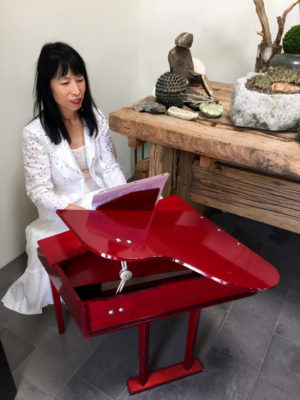 The adventurous Cheng appeared to be highly contented cloistered in this ‘mini-me’ arrangement. Along with a slew of colleagues, she plunked at the repetitive soundings of Terry Riley’s “In C,” dating from 1964.

The seminal minimalist work was staged by Jacaranda’s crafty artistic director Patrick Scott, with site-specific placement of nine players throughout a spectacular home. On the outdoor patio deck, Mark Alan Hilt, Jacaranda’s musical director ponged a xylophone. Below Hilt stretched the flattened city like a massive, far-away crazy quilt. Above, within arm’s reach or so it seemed in the spectacular mild weather, the promise of a musical heaven.

Jacaranda’s supportive community gathered to learn of Scott’s new season to roll out. Highlights include the unusual “American Crime” concert on June 6 featuring compositions for television by Mark Isham. Next January 14, 2017, Jacaranda teams with Valley Performing Arts Center to celebrate composer John Adams’ 70th birthday. And then there’s the season: monthly concerts that spool at the First Presbyterian Church in Santa Monica.

May you ascend higher and higher, Jacaranda! 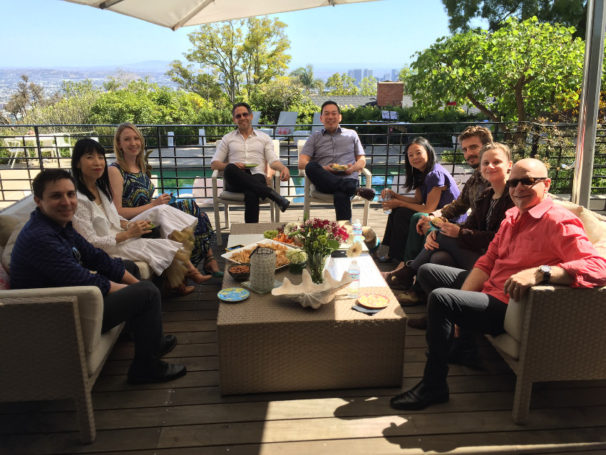