Review: Antiquity updated in SOLUNA Fest’s ‘Rules of the Game’ 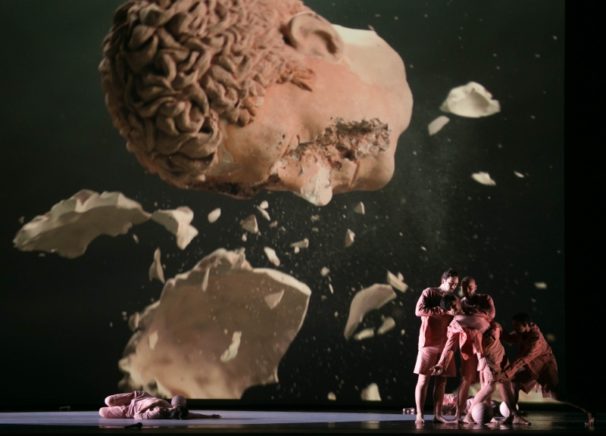 Vulnerable humans cower in the debris of a humongous classical bust crashed to earth. An unnatural occurrence … like an airplane felled. Symbols of ancient civilization  — either Greek, Roman, or a modern approximation of both — tumble down, explode into shards. Not to worry; it’s all fake. It’s video art. This stunning and impactful image signals the potential for profundity packed into a new multidisciplinary theater production, “Rules of the Game,” which had its premiere Tuesday night as opening night of the Nancy A. Nasher and David J. Haemisseger Family SOLUNA International Music & Arts Festival. The Festival continues to spool for two more weeks in Dallas.

SOLUNA’s menu of avant-garde performance and visual-arts happenings seeks to satisfy the increasing appetite for edgy contemporary art in that city. “Rules” was staged at the chic Winspear Opera House located in Dallas’ cool downtown Arts District. And upcoming bookings for “Rules” at weighty national outlets like the Center for the Art of Performance at UCLA* will migrate the production straight outta Dallas in a new performing-arts paradigm: begin in the center and move to the coasts! 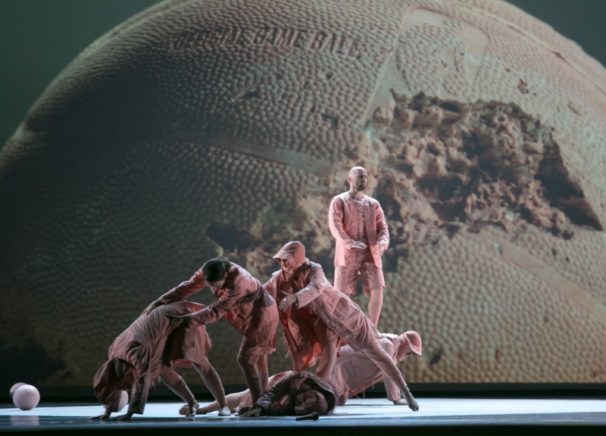 In the above photo, the eight-member dance troupe gathered by choreographer Jonah Bokaer cling like a daisy chain before a bad moon rising. In “Rules”‘s production-designer Daniel Arsham’s febrile conjuring, the luminous sphere takes the form of a basketball. It’s a desiccated one, its smooth surface marred by gouged-out chunks, the crevices of time and friction. Decay and destruction abound.

In response to this challenge, Bokaer’s unusually listless choreography feels perplexing. There’s much posing like statuary. A curious lack of dynamism feels not so much frustrating as a lost opportunity. It’s emotionally muted, it seems determined to quell the work’s humanity — what dance, uniquely in the art world, accesses most directly. 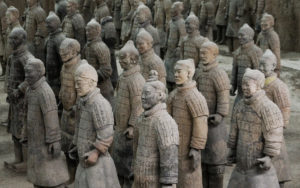 Program notes indicate a purposeful slowness. Dancers were meant to “interact with sculptural works while their movements are slowed down and extended through the use of film in an attempt to emphasize the plasticity of time.” This notwithstanding, clad in their dusky-pink costumes the troupers called to mind the terracotta soldiers of Xian.

The cool young creative team assembled by SOLUNA represents a kind of brilliant stroke — particularly in the unusual commissioning of the vastly talented pop-artist Williams in his first-ever stab at symphonic scoring. Surely “Rules” represents the opening of a door to new audiences unexposed to this genre of post-post-modern theatrical event.

Breaking news: The plugged-in artistic director of CAP-UCLA, Kristy Edmunds, has included “Rules of the Game” as a keystone of her just-announced new season.

[More breaking news: “Rules of the Game” will be presented at the Brooklyn Academy of Music Next Wave Festival. BAM, along with SOLUNA, was an originator of the production.]

SOLUNA International Arts Festival | Dallas Symphony Orchestra | on now
Rules of the Game | Center for the Art of Performance at UCLA | Feb 10, 2017