It’s Oh say can you see & And I am telling you — all in one fell swoop. 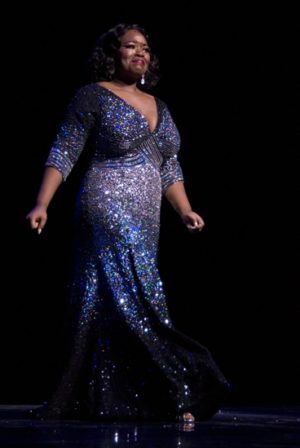 We’re all looking forward to four performances of the Tony Award-laden “Dreamgirls” at the Valley Performing Arts Center in early May.

And now all the more so — having learned that the production’s star, Moya Angela, will warble The Star Spangled Banner at Dodger Stadium this coming Sunday, May 1.

The chanteuse will crack open the Sunday afternoon match-up between the Dodgers and the San Diego Padres.

Isn’t that called a matinee performance? No, no … it’s a “day game.”

[Another cool cross-cutting of the sports and theater worlds is that broadcaster Vin Scully, the long time “Voice of the Dodgers” is now the “Voice of VPAC.” At eight p.m. sharp, the theater plays a pre-performance announcement recorded by Scully, a fan of musical theater. This fun late-career perk arranged by Valley Performing Arts Center Executive Director Thor Steingraber, also known as a baseball nut.]

But as for Moya Angeles, er … Moya Angela, you go, woman! Here’s hoping this huge honor will lead to stellar “Dreamgirls” performances for you!