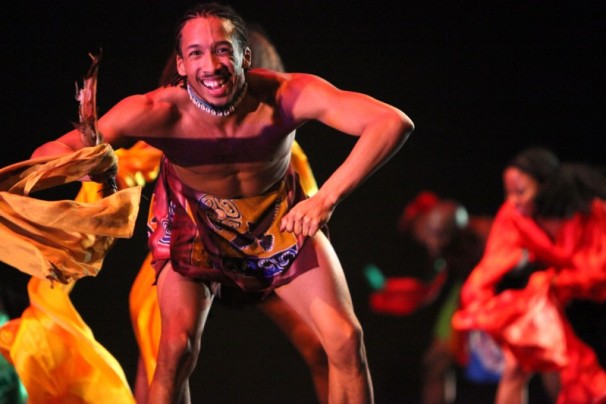 “We all live together on this one planet and we all need to get along.” So states choreographer Lula Washington in her inimitable straight-ahead fashion that has made her not just a beloved figure, but a bulwark, of the Los Angeles dance community. She’s referring to her work “Global Village,” pictured above, which will be on view this weekend, along with other company repertory, in an unusual offering for audiences.

It’s a joint concert Saturday April 2 in which the veteran Lula Washington Dance Theatre, now in its 35th year, will share the stage with a much younger posse, Pony Box Dance Theatre, a three-year-old troupe whose edge arises from its all-male composition.

Why would two companies, traditionally competitors for audience attention, join forces in this manner? It all arose from a simple conversation between two creatives: LWDT Associate Director Tamica Washington-Miller and Pony Box Director, Jamie Carbetta Hammond. Speaking in a Dance Plug Network video interview Tamica says, “The company is always touring the country. We need to rebuild our visibility here in Los Angeles.” By contrast, she notes, “Jamie needs the opportunity to showcase her company.

“So I said, why don’t we just try this together?” 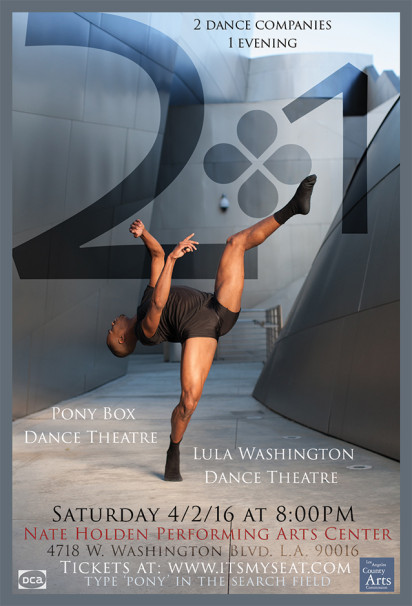 Naturally, economics come into play as well. Explains LWDT longtime company executive director Erwin Washington, “The significant expense of  self-producing in a theater is something every dance company has to deal with if they want to be seen in bigger houses.

“Our goal is to work our way toward an annual home season for the company, instead of focusing on touring.”

This goal notwithstanding, LWDT has some prime bookings heading its way. It will debut in Israel this June at the Tel Aviv Opera House. In mid-April, it will share the stage with Mark Morris Dance Company and American Ballet Theatre at the 20th Anniversary concert and gala for the Virginia Arts Festival.

As for Pony Box, the all-male company based in long Beach derives its fun name from a sage child. Hammond’s daughter, Tatiana, when asked about a drawing she had made, explained, “It’s a pony box, you put everything in it, even your dreams.”

And her mother followed suit.

2 thoughts on “Doubling up to double down: Lula Washington & Pony Box @ Nate Holden”