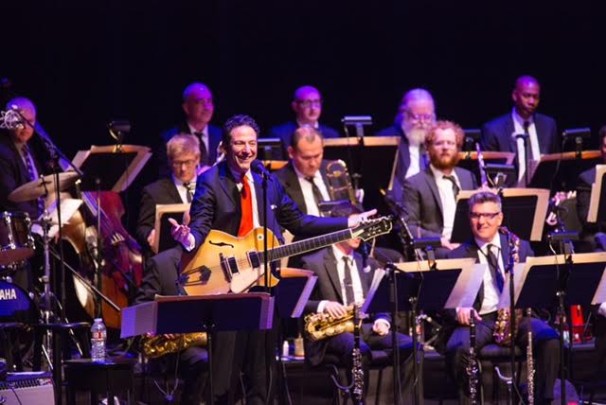 I missed vaudeville. But I am making up for that loss by enjoying the rich artistic performance combos that Thor Steingraber is staging — he’s been inviting multifarious artists to share the stage of the sublimely intimate Valley Performing Arts Center where he is executive director.

Anyone lucky enough to toast Frank Sinatra on the very centenary of his birth, December 12, 1915, by attending the swellegant “Dear Mr. Sinatra: A Swinging Centennial” passed a super-fun evening at VPAC Saturday night.

Fronting a massively forceful and confident big band that spooled sophisticated arrangements of Sinatra standards, the guitarist-singer John Pizzarelli delivered a complex program, chit-chatting with the audience as he went. It was a super show that neatly updated the original vaudeville premise —  a little something for everyone. 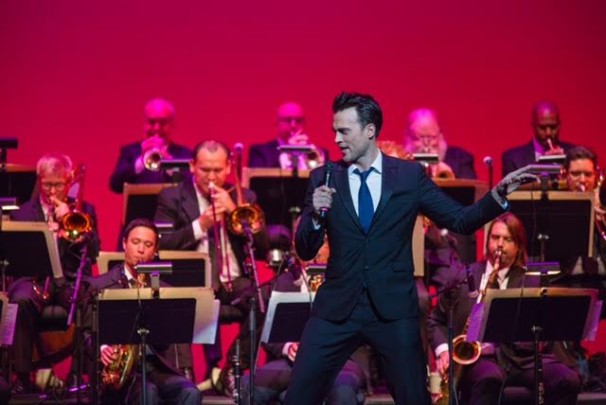 Cheyenne Jackson‘s easy-going style belied his seriously rich range as a singer, with a voice that taps volume as casually as Sinatra tipped his fedora. This young singer gave hope that the saloon swinger/belter archtype lives on.

This duo’s revisit of Something Stupid, channeling Nancy Sinatra-and-père, was delicious. Can “retro” be more charming? 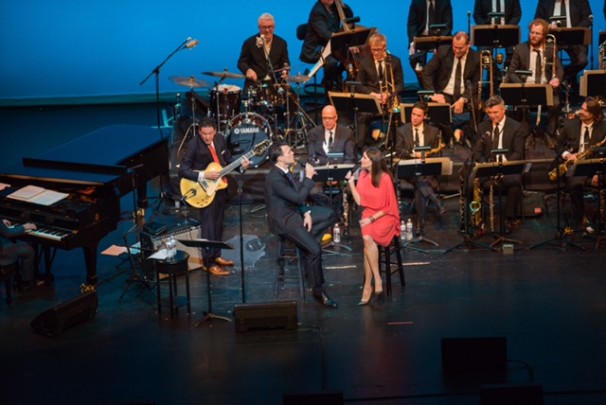 And there was more! Birthday cake and bubbly — not champers but, appropriately, the Italian version, Prosecco. A birthday party for the entire audience thrown in VPAC’s splendid high-ceiling’ed lobby, an act of incredible generosity sponsored by Veneto Hills. “Dear Mr. Sinatra” was a high point of the calendar … but still mid-season, in the northward reaches of the San Fernando Valley, it ain’t over yet.