I like this freewheeling, highly cinematic dance number for nine women, “I’m Alive,” choreographed by Kenny Ortega for Xanadu (1980). Its hyper-realism, fresh swapping of perspective, and other charming trickery prove what the camera can do with dance that’s not possible on stage. Smooth editing and special effects enhance the number.

“I’m Alive” and the film it is part of, occupy an interesting tree branch of Hollywood movie-musical history.

From Wikipedia: The plot of the 1947 film Down to Earth was loosely used as the basis for Xanadu. In the film, Rita Hayworth played Terpsichore, opposite male lead Larry Parks, who played a producer of stage plays.

Down to Earth, of course, tells of the Goddess Terpsichore (Hayworth)  descending from the heavens to oversee her image in a Broadway show, a show-bizzy remake of Here Comes Mr. Jordan (1941). Jack Cole choreographed the Columbia Pictures movie musical, and we see, below, Cole’s version of the Nine Goddesses in the “People Have More Fun” number. 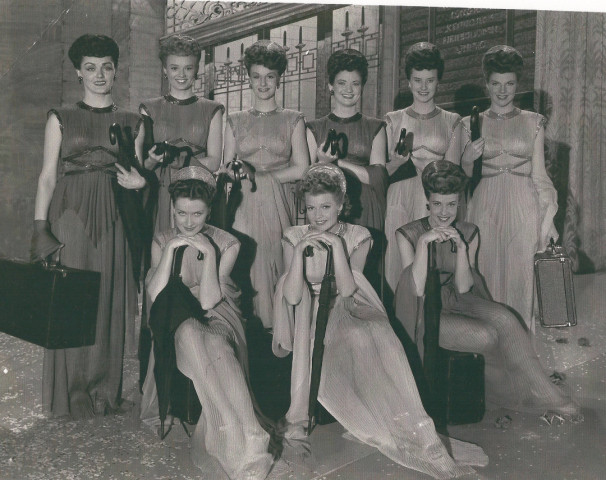 Rita Hayworth was never lovelier than clad in costume designer Jean-Louis’  white toga in the closing moments of Down to Earth.