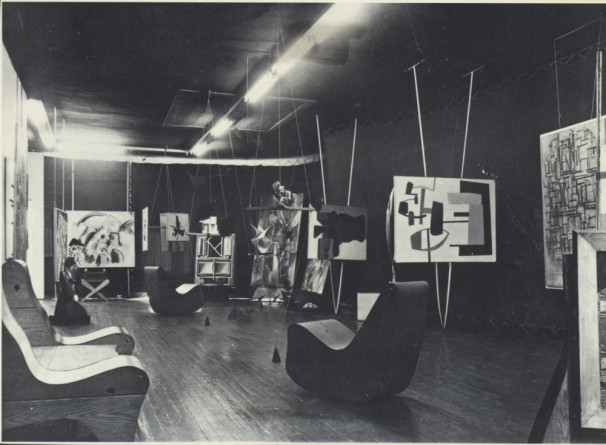 We learn in “Art Addict” that the Frederick Kiesler-designed gallery, from 1942 – 1947 located at 30 West 57th Street, was not only the nesting ground for the great post-war collective of abstract expressionist painters, the New York School, but in its adventurous and unconventional approach to art installation gave three-dimensional form to the Zeitgeist, anticipating art happenings of the sixties. 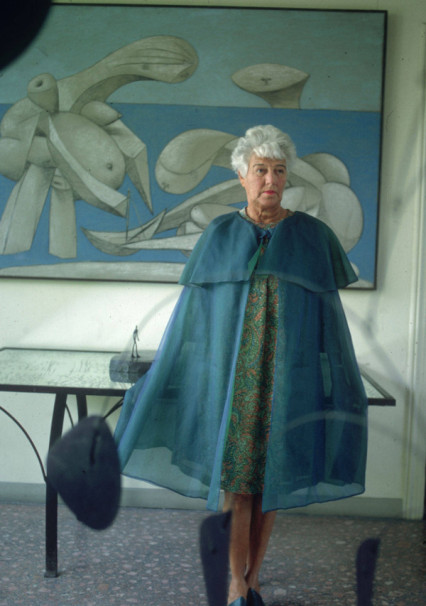 This information was one of the regrettably few coherent takeaways from the frenetically paced documentary which zooms by at a clip mirroring the unsatisfying manner in which many of us take in information anymore — by clicking through an over abundance of images, words and ideas on the Internet.

It relegates nano-seconds,  flash-card presentation, really, to complex art masterpieces of the century that Guggenheim either collected or whose sale she brokered as a dealer. All of this to the sound of a puzzlingly irrelevant film score.

Sound bites from some of the art world’s most learned sages, with a few exceptions, consist of a sentence or two, and that precious time is cut into by a moving graphic element identifying the speaker. Why this huge rush? Our man at LACMA, Michael Govan, gets nary two sentences, and his highly respected contemporary-art curator Carol Eliel the same. I would actually like to know what Govan thinks about Guggenheim in a thoughtful way.

The perpetually depressed arts doyenne built her treasure trove with key purchases made at fire-sale prices as Europe was evacuating artists, filmmakers, and Jews. She smartly bootstrapped her adequate but not limitless fortune. Film doesn’t sufficiently clarify her difficult secret, that she was a “poor Guggenheim”; nor does film, contrary to its title, illuminate Guggenheim as an art addict; that is, what made Peggy tick. She comes off instead as the ultimate of voracious arts consumers. Initially tutored by the best, her own developed fine eye is not born out. The film takes unpleasant pot shots at its subject as well, exposing her personal habits and lifestyle. With a great documentary on Peggy Guggenheim yet to be made, hopeless art addict that I am, I would never miss the current one. Nor, probably, should you.