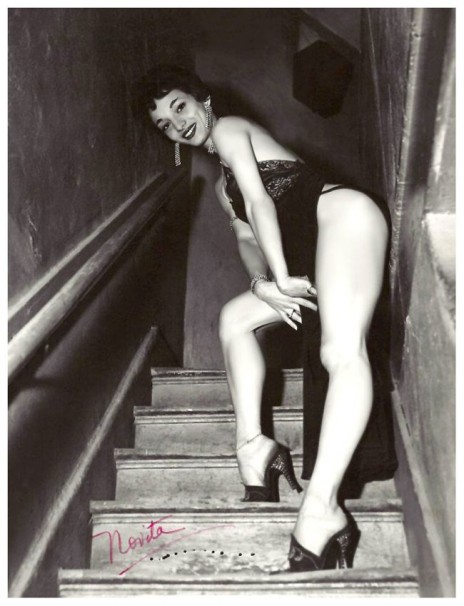 Mitchell met Lenny Bruce and his stripper wife, Honey, on the burly circuit. With her first husband, drummer Buddy Greve, Mitchell doubled dated with Bruce and Honey at Jazz City on Hollywood and Western. “When I wanted to divorce Buddy later on, Lenny gave me the card of his attorney.”

Bruce sweet-talked Rocky Colluccio, the owner of Duffy’s Gaiety on Cahuenga, into allowing him to become entertainment director. The sleepy club was turned into a nightly riot scene as Bruce ushered in a two-year bacchanal of strippers backed by him and his jazz-musician pals. The L.A. burlesque circuit was where Bruce perfected his comic craft, and it never got any wilder than the nights at Duffy’s.

Bruce recruited Novita and Jeanine France, “the Eyeful Tower,” for the grand reopening at Duffy’s on New Year’s Eve 1955. “When Lenny talked Jeanine and me into going into his girl show, I was really glad he did,” Mitchell said. “That meant I could get off my feet. I was sick of going out on tour all the time and playing all those different clubs. When I worked at Duffy’s, I had my days free.”

Read the entire article in the L.A. Weekly.