A whirlwind weekend included the privilege of watching the great dancers of the Mariinsky Theatre deliver a rarity: the full three-act version of Petipa’s Hungarian-themed, “Raymonda,” which the massive dance troupe exactingly performed, a tad jam-packed, on the Segerstrom Hall stage. It went beyond a complete balletic experience; it felt like a life experience to witness this living archive of dance history dating to the late 19th century. The themes of “Raymonda” (the scenario is nearly pre-modern in its depiction of tribal conflict) remain incredibly relevant, as Europe continues to act out a clash between civilizations. As pure dance fodder, the ballet’s set pieces cascade enchantingly: duets, trios, quintets, all capped by the ballerina’s exquisite solo taken at a heartbeat-slow tempo. In short every variety of dance-grouping parades forth, with Petipa’s clean and clear dance language spoken at high level by the Russian dancers. “Raymonda”‘s accrued impact — a hearty reminder of the power of the art form — was met with awed appreciation from the excellent dance audience at Segerstrom Center for the Arts.

One final observation, to borrow from Balanchine: “Raymonda” is woman. 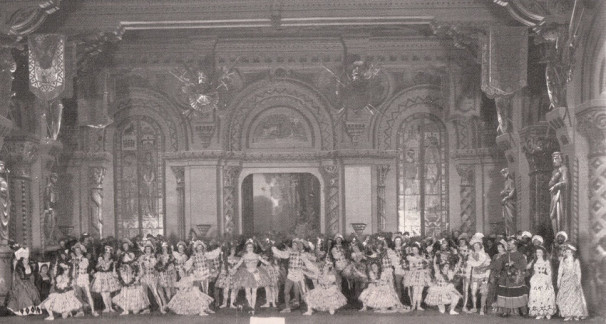 From Wikipedia: Photograph of a scene from the original production of the choreographer Marius Petipa (1818-1910) & the composer Alexander Glazunov’s (1865-1936) 1898 ballet “Raymonda”. The photograph shows the stage of the Mariinsky Theatre with cast and dressed in the décor of the third act of the ballet.