The LA-based company performed its three-part “L’Espace du Temps” at the Valley Performing Arts Center (VPAC) September 19 and 20. Presented in partnership with the Ford Signature Series, it opened VPAC’s exciting 2015-16 season and was touted as an Event. Why? This was the first time this trilogy has been performed in it entirety, and further, with live orchestra. The New West Symphony, tucked into the VPAC orchestra pit where it was conducted by Christopher Rountree, attacked scores by renowned modernist composers Esa-Pekka Salonen and John Adams before relaxing into Philip Glass’ more lyrical Symphony #3 for the third section.

The audience on Sunday afternoon loved everything so much that they applauded before the curtain rose as well as after, whipped up by a pre-show introduction from Diavolo’s founder and artistic director Jacques Heim, a P.T. Barnum-style promoter of his own work. Dressed in artful black, his long hair flowing, Heim emerged again before the third act to announce that one of the dancers had been injured and would not appear in the third piece.

No surprise. The dancers leap from high places, and relentlessly move and manipulate the huge, complex set pieces to such a degree that you wonder why more of them escape this fate. 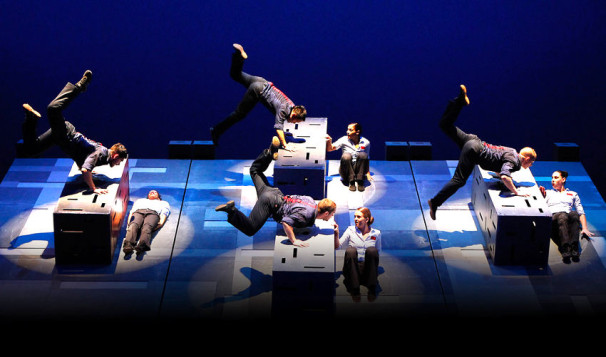 Dance is a minor player in the first two sections, “Foreign Bodies” and “Fearful Symmetries,” overshadowed by the music and massive structures. In fact, the six-page press release about the event listed multiple credits for things like set fabrication, engineering, construction and lighting design but didn’t name any of the dancers. (They were, thankfully, credited in the program.)

The best way to approach these first two works is through the magnificent complexity of the architecture and the challenge of the modernist music. Salonen’s aggressive score opens “Foreign Bodies” (2007) with a crash and rarely lets up. The set is a large windowed cube. Arms, then slithering bodies, emerge from holes in the cube, like eels from prehistoric seas. The dancers deconstruct and manipulate the cube into shiny black pyramids, triangles and walls. They run up them, slide down them, leap from them, and push them into ever changing configurations before putting them back into the original shape. But this time, the dancers are outside the cube not inside. According to the program notes, this is creation, Descartes style.

“Fearful Symmetries” (2010) is all mechanics. Adams’ discordant score is heavy on percussion, a hardscape of sound. Dressed as workmen, the dancers – five men and five women – repeat a movement refrain of wiping sweat from their brows. They are in constant motion, manipulating the huge, Lego-like set pieces into a myriad of hard-edged environments that evoke an industrial world able to create tall buildings, but also entrap us in a vice of steel girders.

I tried to settle into amazement at the creative genius behind these hardscapes, which included a dazzling sloped floor with blue windows of light, but I kept wishing there was more choreography and less set moving. And the blink-and-you-miss-them kisses – one between two men, one between two women, and one between a man and a woman – seemed arbitrary and way too PC. 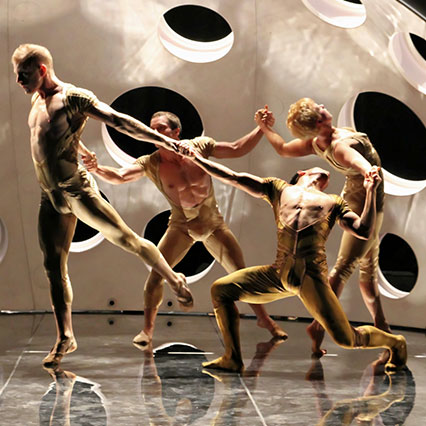 I saw “Fluid Infinities” in Atlanta in 2013, the year it was created. I loved it then, and I loved it on Sunday. It features a large, white curved canopy with Swiss cheese holes. The highlight for me is when the dancers slap up against the surface and stick to it as by magnetic force. “Fluid Infinities” reveals Heim as dance maker – yes, there’s actual dancing! – and the set, the Glass score, and blocks of movement form a cohesive whole.

On Sunday, the lighting in all three sections was a major player, creative and evocative, but always a tad too dim.

Heim isn’t much of a choreographer. Think of him as a unique, in-your-face mechanical shape shifter and you’ll be awed and bowled over by his work. But unlike the sets, you won’t be moved.